I had the privilege to discuss the challenge of ACL injury in females with Dr. Jo Hannafin, Director of the Women’s Sports Medicine Center at the Hospital for Special Surgery in New York City and former president of American Orthopaedic Society for Sports Medicine. I had seen an interview she had done about what she described as the “grief reaction” many girls and women experience after learning they tore the ACL in their knee. I interviewed Dr. Hannafin about the topic for my book, That’s Gotta Hurt: The Injuries That Changed Sports Forever. This is an excerpt from that interview.

Dr. David Geier:       Describe why this is such a devastating injury for females.

Dr. Jo Hannafin:       I think it’s a devastating injury for any athlete. I think when you look at teenage girls, I think it’s a tough time in the world to be a teenager. Teenage girls who are playing competitive sports often, like soccer and other year-round sports, they’ve got groups, high school, travel teams and other things. When you take them out of their sports, they do lose a huge piece of who they are. I see that more in the high school girls that I take care of than the high school boys.

High school boys say, “Okay, I’ve got an injury.” They are very concrete. They are going to get better, and they have a plan. I think high school girls are much more emotional about it.

I do think girls, probably 70-80% of them, go through a grieving process. They burst into tears, even if you are their second opinion. When you tell them that indeed that is what they have wrong, they have a hard time at that age. The mom is trying to tell them it’s going to be okay, and the kid doesn’t want to talk to the mother. I think you have to have a plan, particularly with teenage girls, for how you are going to get them through the process.

Dr. David Geier:       One of the things that I see, with the high school females at least, is that when they tear their ACL, they have surgery, and they are doing well, from a musculoskeletal standpoint, in therapy. They often just seem to be depressed. If you ask, they tell you they don’t get to be with the team, or they are there, but they aren’t really with the team. They feel like they aren’t part of the team anymore. Is that a real thing?

Dr. Jo Hannafin:       No, I think it’s a real thing for girls. Boys kind of do something else. I think the girls are so invested in their team. I do try and encourage them to, if it’s basketball, be the scorer who sits next to the coach. Even when you’re in a break, just go out and shoot foul shots and set shots. You’re not playing basketball, but you’re doing something. If they’re a lacrosse player, I have them just play catch. So they don’t lose the skills that they have. I think around three months is a really hard time because a lot of them start to run, or some of them are a little behind and haven’t started to run. You get the tears, again. “What do you mean, I can’t run?” “Well, watch yourself squat in the mirror. You’re not ready to run.” I think once you get them running, you’re over another hurdle. For me, at four and a half or five months, they say, “I’m ready to play.” “No, you’re not ready to play.” 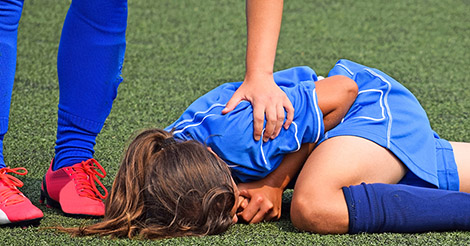 We do an assessment with one of our physical therapists, and we videotape it. We have the kids sit down and watch the video with the therapist and the parent. We say, “This is the position of your knee that’s not ready yet because you still don’t have enough hip strength.” Or, we’ll say, “Your operative knee looks really good, but look at the knee you never injured. That knee is at risk.” We can use the opportunity to train the other side.

I had been trying to get kids back at six months. Now I’m more like eight or nine because I think, especially with high school kids, I think we push them a little too hard. The parents and the child push us to say they’re ready. The therapist can really critique these kids. They may look great in the office. They’ve got great control on a single-leg squat. They can do a triple hop down the hallway in the office. They look really good. Then you go over and watch it on video, and now they’ve been doing stuff for 45 minutes, and they’re fatigued. You see the mechanics fall apart. For soccer, they may be playing 90 minutes.

Dr. Jo Hannafin:       That’s the part where then I start negotiating with the kids and the parents. I may put them in a lightweight brace, get them doing a lot of skills and drills with their team, but no contacts. Then we do scrimmage with their team so they see there’s a future ahead, and then we turn them loose. I think probably a third of them are traumatized by what happened.

Dr. David Geier:       Do you think the incorporation of some of these injury prevention programs into physical therapy after the first injury – hip strengthening and all the other training – is helpful? How important is it to learn some of those mechanics in the rehab phase so it doesn’t happen again?

Dr. Jo Hannafin:       I think it’s huge. Ours is not a high-tech situation. I literally have video cameras set up on a tripod and videotape them: double-leg squat, single-leg squat, double-leg hop, single-leg hop, double-leg side-to-side hop, single-leg side-to-side hop. How many of these kids, when you reconstruct them and then you go test them, their other knee looks awful? They have terrible mechanics in their other knee. You think, “Okay, that’s probably what the injured knee looked like before it was injured.” 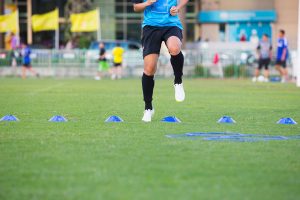 I think it’s incumbent on all of us to try and improve and correct mechanics the best we can. I think there are some kids where you can work for a year and you’re never going to get them there because they already have those patterns. It’s in their memory. The ideal time is when they are 10, 11, and 12 in their rec or their travel soccer programs, like the stuff Mandelbaum has done with PEP.

Train the coaches what are good mechanics and what’s at risk. Parents end up learning when they watch the video. I had a couple parents just come in and say, “I saw this kid running down the field, and I saw their knee turn in, and all of a sudden they were down. I knew they tore their ACL.” They knew that based on watching their bad mechanics get better. I think that’s an important thing that you do, and I think it’s a really important thing the therapists can do.

Dr. David Geier:       Do you think these injury prevention programs are a good thing and worthy efforts for young athletes?

Dr. Jo Hannafin:       I absolutely do. When you look at 12-15 minutes of exercises that you can incorporate into their warm-up, I don’t see any reason not to do it. There’s no downside other than they’re warming up a little bit differently. I think the problem is to really prove that it works. Bert’s (Mandelbaum) got some nice data over periods of three or four years, but you don’t know if some of that is a blip in a statistical curve. One year, there were no ACL injuries in one of the big high school programs we’re in. Was that just a good year? The year before there had been a number. Was it just a bad year and happenstance in field conditions or something like that? I think it’s going to take almost population-based studies to prove.

Dr. Jo Hannafin:       I think if you’re adding 12 or 15 minutes at the beginning of a practice, and you do that for maintenance three times a week, there’s no downside to it. Again, you can slowly create those patterns. I don’t think every ACL is preventable, but when
you look at the teenage girls, I think more of those are preventable than the 28-year-old national team soccer athlete who goes down. They’ve had a 20-year-trial and have never torn their ACL, and it’s just bad luck or the wrong position. When you look at the number of high school kids who do it, I think a lot of those have poor mechanics to start.

They don’t even know how to do a decent squat. You ask them to squat down, and their knees tow in or their feet tow in. Their knees knock together. Their knees are over the tip of their toes. They can’t sit back. They can’t stick their butt out. They haven’t ever learned to do that, and now they’re playing a sport for 60 minutes or 90 minutes. You watch them run, and they run the same way. I think coaches could almost screen some of the kids who are at risk just based on their basic ability to do a squat when they start playing high school soccer. Maybe those are the kids that need a more intensive focus.

Get more terrific information from Dr. Hannafin and other experts about ACL injuries and exercise programs young athletes can use to decrease

their risk in That’s Gotta Hurt: The Injuries That Changed Sports Forever. Get your copy now!