The ACL is one of the most recognized injuries among athletes and sports fans alike. Injury among high-profile professional athletes has increased awareness of a torn ACL. The ACL, or anterior cruciate ligament, is one of the two main stabilizing ligaments in the center of the knee. Working with the posterior cruciate ligament, or PCL, as well as the two main ligaments on the sides of the knee (the medial collateral ligament, or MCL, and the lateral collateral ligament, or LCL), the ACL works to help stabilize the knee against a variety of forces. Specifically, the ACL works to keep the tibia from sliding forward from under the femur or rotating out from under the femur.

Many people associate an ACL tear with a contact sport such as football due to the high number of these injuries, especially in star players such as Tom Brady. Certainly having another player hit the athlete on the knee, causing it to buckle and tear the ACL, is a common mechanism for this injury. What is less commonly known is that injury to this ligament actually occurs as often, if not more often, in noncontact situations. The two classic mechanisms injure the ligament without a direct blow to the knee. One involves landing from a jump with the knee fully extended or hyperextended. The second involves an athlete planting the foot to change directions. The foot stays planted while the knee rotates. With enough force, both scenarios can injure the ACL. These mechanisms are common in sports that involve cutting and pivoting, such as soccer and lacrosse, as well as sports that involve jumping, such as basketball, volleyball, and cheerleading.

Many athletes that injure their ACL will describe feeling or hearing a loud pop in the knee. A complete tear of the ligament usually causes the knee to become very swollen, often within minutes. Bearing weight on the injured leg is often very difficult. Return to the game or practice is usually not possible due to the pain immediately after the injury.

In most cases, the knee injury is severe enough for athletes to seek medical attention. In organized sports, there are often athletic trainers present. If so, or if a sports medicine physician is present, the diagnosis can often be made on the field or sideline. A trainer or physician often can examine the knee before significant swelling has developed and the athlete starts to guard and protect the knee from abnormal movements. In this scenario, the diagnosis of a torn ACL can be made simply by physical examination of the knee. The tibia can be shifted out from under the femur or the knee can be made to buckle in certain positions.

After a few hours, diagnosis of an ACL injury becomes more difficult. Once the knee is significantly swollen and the athlete resists examination of the knee due to pain, physical examination alone is less effective, even in the emergency room or orthopaedic surgery clinics. A sports medicine surgeon will take a thorough history to determine the mechanism of injury. He or she will attempt to perform a physical exam to assess the integrity of the ligament. X-rays are often taken to look for fractures or secondary signs of injury to the ACL. Often an MRI is requested in order to most accurately diagnose the injury in a timely manner. Sometimes athletes will wait a few weeks to ice the knee and work on motion, at which time physical examination by the surgeon might allow easier assessment.

Treatment options for an ACL tear

A complete ACL tear does not typically heal. This fact does not necessarily mean that every patient with this injury needs to have surgery. The problem with a torn ACL is not pain, stiffness, or swelling, although these are usually present initially. Eventually with ice, compression and elevation, and rehabilitation to restore strength and motion, the swelling, pain, and motion will improve. The problem with a torn ACL is a lack of stability of the knee. Athletes who perform cutting and pivoting sports or jumping sports often cannot return to sports after this injury due to the fact that their knees will buckle trying to compete. These athletes almost always need surgery to return to sports. Older athletes, especially those who are active but don’t participate in these types of sports, might be able to return without surgical treatment. Custom braces made to prevent the knee from giving way can be helpful in this population. The effectiveness of these braces in a high-level athlete who plays a sport risky for this injury has been questioned. 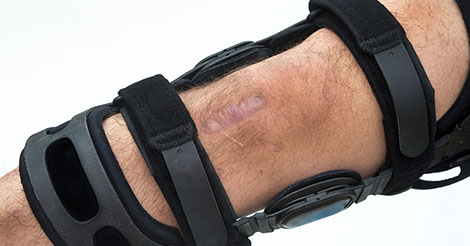 Surgical treatment of a torn ACL involves making a new ligament rather than trying to sew it back together, which is usually not successful. There are many ways to make a new ACL, or reconstruct the ACL. All of the methods involve using grafts or tissue from the patient or from a cadaver. The most popular grafts from the patient include using the middle of the patellar tendon or using the hamstring tendons. A variety of graft options from cadavers exist as well. Each graft option has its own risks and benefits, and a thorough discussion of the different grafts with the surgeon is critical.

The procedure is usually performed as an outpatient. The surgery is done mainly through the scope with the exception of taking the graft. The surgeon will look throughout the knee to evaluate for injury to other structures, such as the meniscus and articular cartilage and usually treat injuries found at the same time.

The patient will often wake up from the surgery with brace as well as a device to allow cold water to flow around the knee. How much weight the patient can put on the leg depends on the status of other structures in the knee, especially the meniscus, as well as the preference of the surgeon.

Other than the quality of the actual surgery, no other intervention is more crucial to a successful outcome than physical therapy. Working with a physical therapist who specializes in sports injuries can make a difference in the success of returning to sports. The rehab process starts almost immediately, with the athlete going to therapy 2-3 days per week initially to work on regaining range of motion. As weight bearing and motion improve, the patient will work aggressively to regain muscle strength. As the knee gets stronger, the therapist will often implement sport-specific functional training to get the knee ready to return to sports. A test to determine the muscle strength at various speeds is often performed to help determine if the knee and surrounding muscles are strong enough to resist forces encountered in sports. The rehabilitation process is lengthy and difficult, but it is crucial to the athlete returning to the same or higher level of sports.

The success rates of returning to the sport that the athlete played are very high, usually noted be more than 90%. The average time to being cleared for sports participation is about six months, but this time can be shorter or longer depending on return of motion and strength and being able to perform the sport-specific functional duties on the reconstructed knee.