Many people have asked me in the days since Indianapolis Colts quarterback Andrew Luck announced his retirement if I was surprised. Yes, I was, but not because he decided the injuries, the pain, and the long rehabs sucked the joy out of football for him. No, I was surprised because so few players actually make that choice. Rather than having more players choose their health over money and walking away from football, I’d love to see football evolve to better protect the health of the athletes. I discuss it in my latest newspaper column.

Calling it the “hardest decision” of his life, but “the right decision for me,” Indianapolis Colts quarterback Andrew Luck announced his retirement Saturday night. That decision was greeted with boos from many Colts fans, with support from current players, and with disbelief from observers across the country.

How could one of the best quarterbacks in the league choose to walk away? How could he leave hundreds of millions of dollars in potential future earnings on the table? Sure, Luck has earned close to $100 million so far. Even ignoring his enormous salary, though, fans wonder how a top athlete could turn his back on what they see as a dream job.

Also read:
NFL coaches push for more time with players in the offseason

The toll of the injury, pain, and rehab cycle

Unfortunately, it’s an easy answer. Injuries and pain versus health and joy. Luck has missed 26 games in his career, including the entire 2017 season. His list of injuries includes tears of his rib cartilage and abdomen, a kidney laceration, a concussion, a labral tear in his shoulder, and now, a calf strain, high ankle sprain and posterior impingement of his ankle. 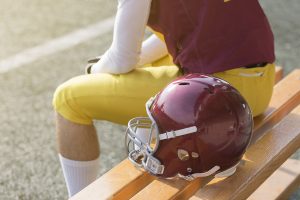 Injuries, hits and long seasons might have influenced Andrew Luck to retire

The wear-and-tear on the four-time Pro Bowl player started early in Indianapolis. In his first three years, he was hit or sacked 352 times, about 60 times more than any other quarterback, according to NFL writer Scott Kacsman.

Even though he is calling it quits before age 30, Luck isn’t young in a football sense. As Ken Belson of the New York Times points out, Luck has played tackle football for two decades.

It’s more than just money that drives athletes to stay in the game. They’re competitive and want to win championships. They want to help their teammates succeed and to please their fans. They play on despite the toll it takes on their bodies.

The NFL and its numerous critics can debate whether football is getting safer, but there is no question about the long-term effects of the injuries, the hits, and the long seasons on players’ bodies. When I watch the NFL Hall of Fame inductions, I’m struck by how many of the former greats struggle to simply walk to the podium.

Fans don’t see the wear and tear on players during the season. TV cameras don’t show athletes painfully stepping into the whirlpool or onto the training table the day after games. They don’t see the mental anguish from around-the-clock pain after one injury, let alone injury after injury like Luck and so many players suffer.

The NFL can take steps to better care for its players

In the days since Luck’s retirement, many have speculated that more players will follow his lead. I actually hope that is not the outcome of this announcement. Instead, I’d like to see the NFL make changes to take better care of the players so fewer of them need to ponder retirement.

Rather than players taking narcotics and getting injections of painkillers to treat their pain, hopefully we can find ways to decrease the pain inflicted on them in the first place. Maybe the league can increase roster sizes so players are on the field for fewer plays each game. Maybe teams can offer mental health specialists to assist the players with the emotional challenges of their injuries.

Will more players be forced to choose between money and their health? Or will the league act to better protect the players and allow them to play the sport they love for many more years?

Note: A modified version of this article appears as my sports medicine column in the August 28, 2019 issue of The Post and Courier.

Today’s NFL is all about pampering QBs, but it didn’t work with Andrew Luck and the Colts. By Mark Maske. Washington Post. August 25, 2019.

Andrew Luck Gave Up Fame, Riches, and Football Because He Is Unapologetically Himself. By Kevin Clarke. The Ringer. August 25, 2019.

Would you risk an earlier death to play football?