To say University of North Carolina women’s soccer coach Anson Dorrance is a legend might be an understatement. He has won 21 national titles with the Tarheels. He has been named national coach of the year eight times. He guided the U.S. Women’s National Team to its first Women’s World Cup. Maybe most importantly, though, only a few schools around the country even had women’s soccer when Dorrance started coached at UNC. He literally put the sport on the map and made it arguably the most popular female sport.

How Dorrance taught his North Carolina teams about competition can help us compete and achieve in every aspect of our lives.

Anson Dorrance and his competitive cauldron

Early in Anson Dorrance’s career, he sought to improve as a coach. He watched a practice run by UNC’s men’s basketball coach Dean Smith and loved how every aspect of the practice was run. Every drill lasted a specific amount of time. And every aspect of a player’s performance during that practice was tracked.

Dorrance implemented much of what he learned from Smith’s practices into what many observers have labeled as his “competitive cauldron.”

Tracking every aspect of practice and performance

Dorrance and his coaching staff record statistics on everything that happens during a practice – successful tackles, passing, shooting, speed, hustle and much more. Then Dorrance posts the statistics for every player in that practice on the locker room wall.

That list essentially ranks each player on their performance and effort – every single day. Each player sees where she ranks compared to her teammates and uses that ranking to motivate herself to try harder to improve. 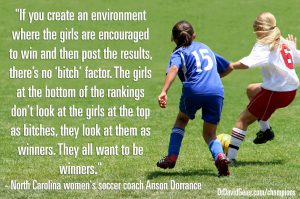 How competition can spark improvement and help team unity

Anson Dorrance believes that these competition statistics motivate his players to compete better than if he simply yelled at them to try harder. The players could look at the list and see where they stand. As the saying goes, “The numbers never lie.”

Initially it might be hard for players who have been among the best players at their level to now be at the bottom compared to their teammates. By essentially pitting the players against each other in practice, he encourages them to make themselves better.

He also believes that these rankings unite the team. Instead of players ranked toward the bottom looking at the top players and being jealous, they saw the standouts as winners who they wanted to emulate and surpass.

Use competition to achieve your goals in sports, school, and business

In the video above, I discuss Dorrance’s competitive cauldron and how leaders can use a similar approach to getting the best out of their teams. If you want to excel in sports, school or your job, a similar strategy can help you become a champion in what you want to do.