In this Ask Dr. Geier column, I discuss playing through pain and specifically the risks of playing sports with a possible tibial stress fracture.

My 15-year-old daughter is a State Team player at her age. It appears she developed a tibial stress fracture in the inner portion of her left calf about 3 inches above the ankle back in mid-April. Diagnosis from family practice was shin splints and no x-ray, as she had pain to the touch in both legs, although she didn’t even know it until the doctor pressed into the right inner calf. She reduced her play, but as her club team was in the state cup, she continued to play until May 7 when she stopped for a month. Pain to the touch was less, and pain in general was inconsistent and all pain, even to touch was gone by early June. She went back to soccer on June 7. No pain before, during or after. On June 9 she felt it again. Minimal, but there. She played in 2 games June 11/12. Some pain, but nothing like April. She stopped again. Today there is sensation and just the slightest pain to touch. She’d say a .5 on scale of 0-10.
Then today she got a bone scan and new x-ray. The bone scan showed a dime-sized glow in area. Not limited to tibia shadow, overlapping 1/3 to 1/2 of tibia shadow. Layman here. X-ray looked as clean to me as a month ago when everyone said it was clean. Haven’t spoken to any doctor today, and may not be able to talk to sports medicine doctor until Monday. Monday we’ll be across state where team is playing in western regionals. A big deal.
Daughter’s sports medicine doctor doesn’t appear to comprehend importance of this tournament, or ODP camp on July 5th. I need to know risks and whether my daughter can play using level of pain to manage her play? Can she play if pain doesn’t exceed what she felt last April? Whether she can play if it get’s no worse than what she felt after last Sunday’s match where the pain was 1/4 of what she felt in April? Is she stupid to play at all with any pain? We just need some honest advise and to know the realistic risks.
It didn’t help to have her Sports Medicine doctor say, and she did say it, “it’s not like I never played with a stress fracture”.

How does a tibial stress fracture occur?

Like stress fractures of other parts of the body, a tibial stress fracture results from too much microscopic stress on a portion of a bone without enough time to heal. While most common in perimenopausal women with osteoporosis, teenage athletes, especially females, are not immune from stress fractures. They are common in running sports like cross country, track, and soccer. Young female athletes are especially at risk, so ensuring adequate caloric and vitamin intake and regular menstrual cycles is important.

Treatment of a tibial stress fracture

Tibial stress fractures are particularly dangerous due to the amount of weight this bone bears with each step. If a high-level athlete is diagnosed with a tibial stress fracture, treatment includes stopping the sport or offending activity at a minimum. Often sports medicine physicians will make her completely nonweightbearing, making her get around on crutches. Fractures slow to heal, that are particularly painful, or that show a “dreaded black line” (disruption of the bone’s outer component) on an x-ray often require surgery to place a rod down the center of the bone.

Risks of playing sports with a tibial stress fracture

There are two main risks with continuing to play or train on a tibial stress fracture. The first is unlikely but potentially devastating. The athlete could be running or jumping, and the stress could finally cause a complete fracture. That’s right. Snap. The tibia breaks, and the leg is floppy. Think Joe Theismann. Surgery then becomes close to emergent and not a worst-case scenario.

(While that scenario is fortunately uncommon, it does happen. I had a patient a couple of years ago with a humeral shaft stress fracture who insisted on continuing to pitch, as he had a national championship tournament coming up. He pitched well until about the fifth inning of his first start, when he threw a pitch and his arm snapped. That pitch ended his tournament, and the subsequent surgery kept him out of baseball for another 5-6 months.) 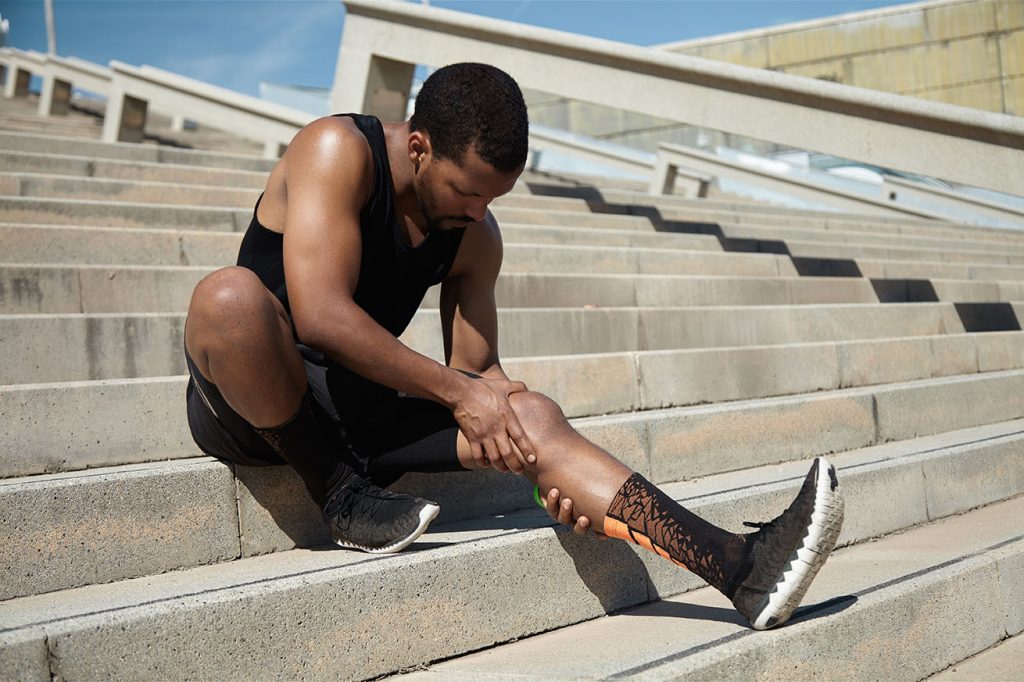 The second risk is more likely. Continuing to play on a tibial stress fracture likely will keep it from healing. This bone has a blood supply that makes stress fractures difficult to heal anyway. Continued stress just increases the likelihood that the stress fracture becomes a nonunion. Not only would surgery become more likely, but the needed surgery might be more difficult, possibly requiring additional bone grafting.

If an athlete does try to compete, I would recommend she stop and try to heal for 6-8 weeks as soon as the game or race is over. Most of the time, however, the pain is great enough that it limits the ability to compete at that level, and that pain helps to influence the athlete to stop.

Now I admit that some athletes might get away with trying to play a game or two or run a race with a tibial stress fracture. They might not suffer any long-term consequences. And while I expect that most sports medicine physicians will advise athletes to stop playing immediately when this diagnosis is made, we have all faced this dilemma where the athletes want to play. While I would advise that the risks likely outweigh the benefits in these cases, ultimately the athlete has to decide for herself.

Episode 16: When should you consider switching doctors?

Can a tibial stress fracture heal on its own?