Brain injuries in football: Is 6 months enough time to recovery?

Football players receive a tremendous number of head impacts over the course of the season. Most of these hits aren’t serious enough to cause a significant injury. With media attention on brain injuries in football at a high level, concern exists about the cumulative effect of these blows, though.

How long, then, does it take for a player’s brain to fully return to normal after a season of these head impacts?

Changes in the brain’s white matter

A study published this month in Plos One suggests that the usual six-month offseason might not be enough.

Jeffrey Bazarian and his team reviewed diffusion tensor imaging studies of the brains of 10 college football players and five non-athletes before and after a football season. They also analyzed the brains after a six-month period of no-contact rest. 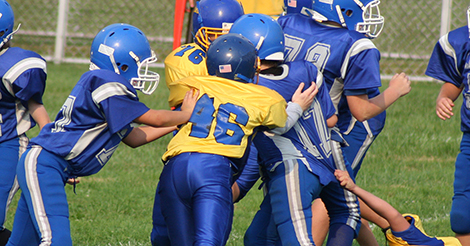 Are these findings worrisome?

The good news is that the changes on these brain studies did not mean the players exhibited any symptoms. Their true significance is unclear. They could be silent findings, or they could represent changes in brains more susceptible to head impacts and concussions.

It’s at least worth asking if six months is long enough of an off-season. The 10 players in the study had no contact during those six months.  Most football teams have spring practices or off-season training that shortens their true rest periods.

Where do we go from here?

There is clearly much more we need to learn from studies like this one. Over time, I expect we will hear more calls for change. Are hit counts and keeping players below a threshold number of hits on the horizon? Will teams and leagues eliminate contact from practices one or more days each week? Will more youth organizations push for limiting contact for players under the age of 12 or 14?