What you can learn from U.S. soccer star Carli Lloyd about failure

Carli Lloyd might be one of the best American soccer players ever. She scored three goals in the 2015 Women’s World Cup final, winning the Golden Ball for best player of the tournament. She has won two Olympic gold medals with the U.S. Women’s National Team. She was named the FIFA Player of the Year in both 2015 and 2016.

Abby Wambach calls her “the most gifted player I’ve ever known.”

Carli’s journey to the top of the soccer world was not all triumphs and happiness. Like most people who reach the top levels of success, there were many disappointments and failures along the way.

Carli Lloyd gets cut from the U-21 national team

While attending Rutgers University, Lloyd made the United States Under-21 soccer team. At the end of a camp to prepare for a trip to Brazil and then the Nordic cup, the head coach of the U-21s, Chris Petrucelli, met with every player to discuss her spot on the team.

Carli sat down with Petrucelli believing she was good enough to go to Brazil with the U-21 team. Her coach saw it differently. While he told Carli that she was indeed talented enough to be a national team player, he pointed out her tendency to take time off during play. She didn’t put in the needed effort defensively. She didn’t work hard enough.

Petrucelli cut Lloyd from the U-21 team. 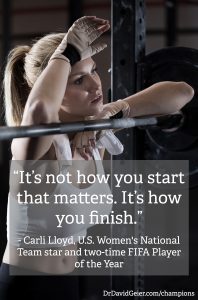 Carli Lloyd’s dream was to make the full U.S. Women’s National Team one day. Now she questioned whether she should quit soccer altogether. If she couldn’t make the U-21s, how could she make the senior squad?

In that moment, sitting in a hotel lobby across from her coach, she hated Petrucelli for crushing her dream.

Lloyd returned to her home state of New Jersey. A few days later, she heard that the U-21 team was looking for a friendly match before heading to Brazil. They decided to take on a New Jersey team Carli played for occasionally. She would get to compete against the coach who told her that he couldn’t recommend her for the national team.

Carli Lloyd gets a second chance to prove herself

“Do payback opportunities get any better?” she wondered.

Given a second chance of sorts, Carli played with a new intensity. She delivered hard tackles. She won 50-50 balls. She attacked the entire match.

The day after the friendly against the U-21s, Carli received a call from Petrucelli. One of the U-21 players was injured in that friendly. He now offered her a spot on the team traveling to Brazil.

Petrucelli complimented her effort in that friendly. “Carli was a different player. Her overall commitment to playing the game was way different that night,” he later remarked.

Facing adversity as we pursue our goals

As we pursue our goals, we will face adversity. Every single one of us will. We might get cut from the team. We might get turned down for a speaking opportunity. We might lose a sale, or many sales. We might get fired.

The challenge when faced with this kind of adversity is to use it to propel us further and not as a reason to quit. It’s not the failure that is important. It’s how we respond that matters. Or as Carli points out, “It’s not how you start that matters, it’s how you finish.”

“It’s not how you start that matters. It’s how you finish.”

I love the U-21 story because Carli Lloyd’s response to getting cut should serve as a model for how we must react to our own failures. Yes, she called her parents, devastated from possibly missing out on her dream. But she saw an opportunity to prove herself again, and she took it. She used the setback as motivation, and she raised her game to a new level.

Now Lloyd tells Petrucelli whenever she sees him that he played an important role in saving her career.

Responding to adversity and failure

How will you respond when adversity strikes? Will you complain that the situation isn’t fair or that your boss doesn’t know what he’s doing? Will you blame other people or external circumstances?

Will you give up? Or will you pull yourself up and fight?

Post a picture or message from that failure on the wall by your desk to remind yourself to work harder. Step back from the situation and find a few things you could have done differently. Keep looking for opportunities to prove yourself and get closer to your goal.

Most of us will never play for the national team in any sport. We are all pursuing our own World Cup in whatever we do, though. Whatever the setback is that inevitably arises, we must not lose hope or lose sight of the goal. We must use this setback as motivation to keep pushing ahead to ultimately achieve the success we want.

Sources:
When Nobody Was Watching: My Hard-Fight Journey to the Top of the Soccer World by Carli Lloyd with Wayne Coffey
Forward by Abby Wambach with Karen Abbott

What we can learn from U.S. Women’s National Team star Carli Lloyd about dedication

What we can learn from Nick Saban about fixing mistakes

What we can learn from Jerry Rice about dedication