A catastrophic cervical spine injury, by definition, is a structural disruption of the cervical spinal column that can damage the spinal cord.

The mechanism in which most cases of catastrophic cervical spine injury occur in football is remarkably consistent.

Mechanism of injury in a catastrophic cervical spine injury

Contact with the player occurs at the crown of the helmet. In most cases, the muscles on the sides of the cervical vertebrae and the intervertebral disks between these vertebrae in the neck effectively dissipate these forces.

If an athlete attempts to tackle or block his opponent with his head down, he puts his spine in a much more vulnerable position. The cervical spine normally has a concave alignment. If the player flexes his neck 30°, the spine becomes a segmented column, like a stack of dimes.

Anatomically this mechanism of injury is best described as an axial loading of the cervical spine. With the head stopped and the trunk still moving, the intervertebral discs attempt to dissipate the compressive force. If the force exceeds what the discs can withstand, buckling and angular deformity in the bones and discs of the cervical spine result. Fractures of the bones, dislocations between the bones, or both, can occur, often driving bony fragments or disc material into the spinal canal. The bone or disc fragments can potentially cause a spinal cord injury. 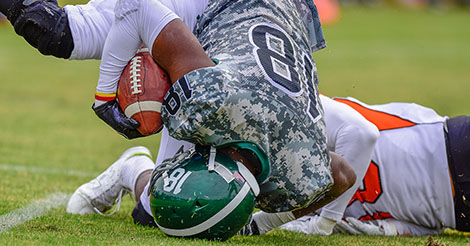 In my new book, That’s Gotta Hurt: The Injuries That Changed Sports Forever, I discuss catastrophic cervical spine injuries and how young

athletes can try to avoid suffering them. If you have kids who play football, you should all read it and take steps to stay healthy. Get your copy now!

Also read:
Spinal cord injuries in football and other sports: An interview with Dr. Frederick Mueller