I receive a lot of comments when I discuss injuries in different sports and offer my ideas for strategies to prevent them – whether it’s in my newspaper column, or my website or social media, or in media interviews. Many of the comments generally support my view that we need to do what we can to protect the athletes. On the other hand, many comments I receive go something like this:

“I appreciate you bringing attention to these injuries, but sports are dangerous. Injuries are going to occur. Every athlete who steps on a field or court knows there is a risk of getting hurt. We need to stop adding rules that change these sports and make the athletes soft and just let them play.”

I understand the sentiment. In some cases, I’ve questioned the logic of a specific rule and whether it actually protects the athletes, such as the new “roughing the passer” rule adopted by the NFL prior to this season.

The reality of sports, though, is that they can lead to more serious injuries than sprained ankles and sore knees. Some athletes suffer injuries that cause lifelong pain that makes it hard to work, exercise, and lead a normal life. In some cases, sports can lead to death or paralysis of an athlete.

In this last category of injuries, we can show that efforts to prevent injuries have made a real difference for the athletes.

Also read:
High school cheerleading injuries: Is it safer than we thought?

Let’s go back about a decade. A 2010 ABC News headline read “Most Dangerous ‘Sport’ of All May Be Cheerleading.”

“They make you sign a medical release when you join a cheerleading team. They ought to tell the girls that they are signing a death waiver,” claimed a cheerleader quoted by The New York Times in a 2007 story.

The Washington Post published a story in 2013, using data from a 2012 statement by the American Academy of Pediatrics, showing how cheerleading accounted for 65 percent of all direct catastrophic injuries to female athletes at the high school level and 70.8 percent at the college level between 1982 and 2009.

We define a catastrophic injury as one that causes permanent spinal injury and paralysis. Among female athletes, cheerleading did account for a huge percentage of these injuries. Between a few athletes who died and a small but significant number who suffered neck and back injuries that left them paralyzed, cheerleading received quite a bit of unflattering media attention. 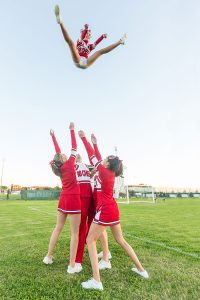 The activity’s leaders recognized a problem and took action, even before the media reports.

Starting in 2002, the American Association of Cheerleading Coaches and Administrators (AACCA) and National Federation of State High School Associations (NFHS) implemented several rules changes to make cheerleading safer. Most notably, prior to the 2006-2007 academic year, the AACCS and NFHS banned basket tosses on hard surfaces like basketball courts at both the high school and college levels.

If you aren’t familiar with cheerleading and the stunts the teams perform, a basket toss involves multiple cheerleaders locking hands to toss another cheerleader high into the air.

Did the basket toss rule change make a difference?

A study recently published in the journal Sports Health shows that these efforts made a real difference in protecting the athletes. Rebecca K. Yau, PhD and others analyzed cheerleading injury data collected by the National Center for Catastrophic Sport Injury Research from July 2002 to June 2017.

Cheer experts and leaders recognize that more work is needed to decrease the risk of injuries even further.

Can we achieve similar injury reductions in other sports?

The problem for most sports fans – football fans mostly – who feel that sports and medical experts are going too far in changing the rules is that there is rarely one clear risk like the basket toss in cheer.

Maybe eliminating kickoffs in football could decrease concussions significantly, but other changes might only decrease injuries a small amount. Adopting a large number of rules changes over time could lead to a large overall injury reduction, but the effect of those rules might have fans of the sport complaining about what they see on the field.

Plus, in sports like football and boxing, their fundamental activities – tackling and punching – make dramatically decreasing injuries almost impossible without radically altering the nature of the sports.

Also read:
Is cheerleading more dangerous than other sports?

The process used by the AACCA is one we must continue to use in all sports. Use data to identify the problem. Take steps to eliminate or decrease the risk of injury. Collect many years of data, and then assess whether the strategy effectively lowered the risk.

Cheerleading is on the right track. Let’s continue to look for similar prevention strategies for athletes in all sports.

Note: A modified version of this article appears as my sports medicine column in the December 3, 2018 issue of The Post and Courier.

Cheerleading accounts for more than half of ‘catastrophic’ injuries to girl athletes. By Lenny Bernstein. Washington Post. September 10, 2013.

Most Dangerous ‘Sport’ of All May Be Cheerleading. By Lisa Lingarash Ghadishah. ABC News. January 4, 2010

As Cheerleaders Soar Higher, So Does the Danger. By Bill Pennington. New York Times. March 31, 2007.