Decreasing the risk of quadriplegia and cervical spine injuries in football

I devoted an entire chapter of my book, That’s Gotta Hurt: The Injuries That Changed Sports Forever, to Marc Buoniconti and his neck injury that led him to become paralyzed from the neck down. I had the opportunity to discuss these catastrophic cervical spine injuries with Dr. Fred Mueller and Dr. Barry Boden, experts in these very serious sports injuries.

When I heard about the injury of University of South Carolina wide receiver Terry Googer, I immediately suspected concern for a cervical spine injury. Fortunately he turned out to be ok, but his injury at least allows me to discuss quadriplegia and ways to decrease the risk of catastrophic cervical spine injuries in football. 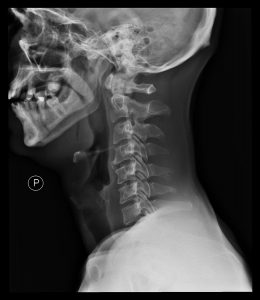 The battle at Kyle Field provided a scary moment for University of South Carolina fans. In the first quarter of the Gamecocks’ game against Texas A&M, wide receiver Terry Googer suffered what appeared to be a potentially catastrophic injury.

The junior from Atlanta fell to the ground while blocking on a punt. As he remained on the field, the medical staffs from both teams attended to him. They removed his helmet, padded his head and neck with rolled towels and transferred him to a spine board.

As the cart drove Googer off the field, he gave the crowd a thumbs-up sign to tremendous applause. On arrival at a local hospital, Googer could move all his extremities. He was released and returned to Kyle Field hours later.

Googer later tweeted his thanks to the doctors of both teams and the South Carolina coaches. “It was a scary moment but I’m recovering and hopeful that I will be back soon!”

We don’t know the specific injury Googer suffered on that special teams play. A serious head injury is possible, but the use of a spine board and rolled towels to protect the neck suggests concerns for cervical spine injury. While Googer recovered uneventfully, not all football players are as lucky.

Also read:
Spinal cord injuries in football and other sports: An interview with Dr. Frederick Mueller

Direct catastrophic injuries are those injuries during sports that cause death or permanent neurologic disability. Catastrophic cervical spine injuries can occur in ice hockey, rugby and other collision sports, but they are most often associated with football.

In 1976, 34 players became quadriplegic due to cervical spine injuries in high school and college football. The NCAA banned spear tackling that year to try to decrease the risk. Spear tackling refers to intentionally striking an opponent with the crown of the helmet.

Since an axial load delivered from the top of the head down through the spine is the predominant mechanism of quadriplegia injuries, the spear tackling ban decreased these events dramatically. In the 1980s, the number of quadriplegic injuries in high school and college football dropped to roughly 10 per year. In the 1990s, the average improved to about six cases per year.

The NCAA removed the word “intentional” from the spear tackling rule for the 2005- 2006 season to make it easier for referees to call spearing penalties. Intent was no longer required to draw a flag.

Improvements in catastrophic injuries, but the risk is still present

Despite the rule changes, approximately 15 direct catastrophic cervical spine injuries and six quadriplegia events occur each year. More occur at the high school level because more athletes play high school football. It seems likely that the rate of these injuries is higher in college football because those players are bigger and faster. Defensive players, especially those in the secondary, and special teams players have the highest risk. 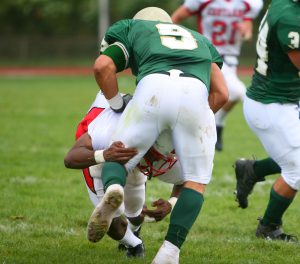 The message for football players is clear. Young players must learn to tackle opponents with their head up. Coaches should consistently preach against tackling with the head down like a battering ram.

Still, the offensive player can change direction at the last second, so it’s not possible to prevent every cervical spine injury.

The need for athletic trainers at football games and practices

That’s why it’s so important to have athletic trainers present at every game and practice. The athletic trainer can assess the injured athlete, immobilize him, help transfer him to a spine board and assist in his transport to a nearby hospital.

Fortunately, Googer’s treatment turned out to be precautionary. All reports suggest he will be fine. While catastrophic head and neck injuries are possible in football, with proper tackling techniques and appropriate medical staff present, we can at least decrease the risk as much as possible.

If you want to read more about Marc Buoniconti’s injury and his foundation’s spinal cord research, as well as hear the thoughts of Drs. Mueller and Boden about lowering the risk of spinal cord injuries in football, check out my new book, That’s Gotta Hurt: The Injuries That Changed Sports Forever. It has important tips on preventing these injuries for young athletes and their parents and coaches. Click here to get your copy!

Note: A modified version of this article appears as my sports medicine column in the October 5, 2017 issue of The Post and Courier.