A new study by the National Athletic Trainers’ Association received a large amount of media attention. Reporters largely focused on one statistic that showed how a significant percentage of coaches in college sports try to influence medical decisions made by school athletic trainers and team physicians. While this statistic is shocking, there are other aspects of the survey that deserve equal attention. I discuss the study in my latest newspaper column.

The rising influence of college coaches

The power of coaches in college sports has never been greater. As salaries continue to skyrocket – look no further than Clemson’s Dabo Sweeney signing a 10-year, $93 million contract in April – their influence on campus will as well. However, there is one area coaches should have no power or influence at all – medical treatment decisions for their players.

Most of the media coverage of this NATA survey has focused on one statistic. Almost 19 percent of the athletic trainers responding reported that a coach played an athlete who was declared ineligible for participation due to injury.

In a press release for the survey, NATA president Tory Lindley, MA, ATC explains the seemingly obvious problem with coaches not listening to the medical staff. “Student athletes and their parents should feel confident that decisions about health and safety are based solely on medical information and judgment and are not influenced by personnel who are not trained and experienced in that area.”

These findings come three years after the NCAA passed legislation aiming to prevent coaches and administrators from influencing medical decisions. The NCAA adopted a policy requiring a structure in which athletic trainers and team physicians would have the final say on return-to-play decisions.

The survey found just over half – 51.73 percent – of college sports programs follow the NCAA-legislated independent medical model of care. Over 76 percent of the responding athletic trainers felt that they have medical autonomy in their programs, meaning they have unchallengeable authority to make medical treatment decisions.

Viewed another way, the medical staff at almost 1 in 4 college sports programs does not feel they have unquestionable authority to manage athletes medically. Presumably coaches and athletic directors at those schools influence the decisions despite having no medical training. 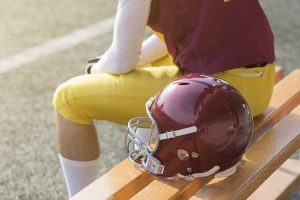 Undue pressure from coaches on the sports medicine staff

Possibly more frightening, over one third – 36.32 percent – of the athletic trainers who participated in the survey reported that a coach influenced the hiring or firing of the sports medicine staff. Out of this group, about 3 in 5 claimed they received pressure from a coach, administrator, or a member of the coaching staff to make a decision that was not in the best interest of the athlete’s health.

To me, this issue is perfectly clear. A coach should feel free to ask the medical staff about an athlete’s condition. But under no circumstances should the coach try to dictate the treatment decision. There should be absolutely no pressure from the coach placed on the athletic trainer, team physician, or the athlete himself or herself to play if the medical staff rules that player out.

Just as a team doctor or athletic trainer would never suggest what play a coach should call on a third down with 10 yards to go, the coach should not tell an athlete to get back in the game after dislocating his or her shoulder.

Lindley, who also serves as the Senior Associate Athletic Director for Health, Safety and Performance at Northwestern, argues that coaches should never question decisions from the medical staff. In an interview with ESPN, Lindley correctly explains, “A coach should not have any type of an opportunity to provide an opinion on whether or not those decisions are being made correctly. They lack the medical expertise to provide an opinion.”

Also read:
Injuries in college sports: Does football cause the most injuries?

Jordan McNair and other college football deaths after team workouts

This survey comes about a year after the death of University of Maryland offensive lineman Jordan McNair, which led to sweeping changes in the sports medicine staff at the school, as well as the firing of head coach D.J. Durkin.

According to HBO’s Real Sports with Bryant Gumbel, 30 college football players have died from team workouts since 2000.

Starting next month, NCAA legislation goes into effect which requires college strength and conditioning coaches to report to sports medicine or sports performance supervisors instead of head coaches.

Hopefully these results and widespread media coverage of them will discourage college coaches from trying to influence medical decisions about their players. Their health and safety are at stake.

Note: A modified version of this article appears as my sports medicine column in the July 5, 2019 issue of The Post and Courier.

College Coaches Have Too Much Influence And Unchecked Power Opposite Medical Staffs, Survey Suggests. By Joseph Nardone. Forbes.com. June 25, 2019.

Maryland moves to meet key recommendation made in wake of Jordan McNair’s death. By Emily Giambalvo. Washington Post. May 23, 2019.