Want to decrease your risk of tearing your ACL graft? Do this before you return to sports.

ACL injuries and surgeries to treat them are far too common for athletes and active individuals. Return-to-sports rates are generally felt to be good, with roughly two-thirds of athletes returning to their preinjury level of play by 12 months after surgery.

Unfortunately, a decent percentage of athletes suffer a second injury, tearing the graft. Most of those athletes require a more difficult revision surgery and another long period of rehab.

Is there a way to predict who is likely to tear the ACL graft after ACL reconstruction surgery? And if there is, can athletic people take steps to avoid those risks?

A new study published in the British Journal of Sports Medicine looked at discharge criteria a patient had to meet before being allowed to return to play. The researchers analyzed which patients met those discharge criteria – and who didn’t – and determined if that factor influenced the risk of ACL graft rupture.

Criteria before returning to sports after ACL surgery

Before returning to play, patients had to meet six criteria: 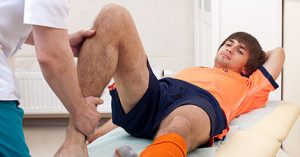 Patients had to demonstrate a strength deficit of less than 10% in their quadriceps in the surgical leg compared to the uninjured leg based on isokinetic test at different speeds.

Patients had to hop as far as they could on one leg and then achieve 90% of the distance traveled when they hopped on the nonsurgical leg. They also had to meet that goal with the triple hop. Finally, they had to jump back and forth over a line while performing the three hops.

Did these criteria influence the risk of ACL graft rupture? Without question.

Pro athletes who did not meet these six discharge criteria before returning to sports had a four times higher risk of suffering a tear of the ACL graft compared to athletes who met all of these criteria.

The study clearly demonstrates the importance of dedicated rehab with a physical therapist who knows and understands these surgeries and how to help athletes overcome them quickly and safely. Patients need more than just getting all their motion back and swelling down. They need the strength, balance, agility and neuromuscular control used in their sports. The physical therapist can help them regain these skills, identify weaknesses and correct them before the athlete steps on the field or court.

I have written extensively about ACL injuries and why and how we must prevent them in my new book, That’s Gotta Hurt: The Injuries That Changed Sports Forever. If you or your kids play sports, you must read it.

Order your copy now from Amazon, Barnes and Noble, Books-A-Million, or Powell’s Books.