I have written numerous newspaper columns about concussions, CTE and the risks of football. To be fair, concussions and CTE are not exclusive to the sport. While I still believe we must continue to educate athletes and parents about these injuries and their risks, we must also take steps to make sports as safe as possible for the athletes. I addressed some new research about CTE and concussions adding to our understanding of these conditions in my latest column.

Football has become synonymous with Thanksgiving. At some point during this holiday, we will watch a key player suffer a concussion and hear commentators discuss the dangers of head trauma in football.

Don’t dismiss this as another article in which I slam football and argue the risks of playing football. In the spirit of the Thanksgiving holiday, I want to express my thanks to brain researchers around the country, and all around the world. The last month alone has brought numerous scientific discoveries about CTE and concussions. The more we learn, the more informed our decisions as parents, coaches and athletes can be. 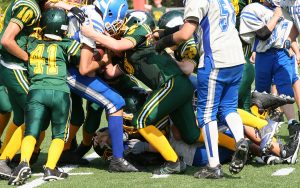 The first two studies I’ll discuss offer hope to current football players, athletes in other sports and members of the military regarding CTE. CTE is the degenerative brain condition believed to be caused by repetitive blows to the head over time. CTE presents with symptoms like memory loss, anger and mood swings. Athletes currently can only be diagnosed with CTE by autopsy after death.

Dr. Bennet Omalu, Dr. Julian Bailes and other researchers discovered CTE in a living player. Fred McNeill, a former Minnesota Vikings linebacker, was one of 14 living retired NFL players determined to have CTE through a special brain scan. McNeill’s CTE was recently confirmed by autopsy after he died.

This new scan detects the presence of a protein, tau, in specific regions of the brain associated with CTE. Dr. Bailes told reporters he believes this discovery brings us closer to being able to diagnose players with CTE while they are still alive.

A possible biomarker for CTE

Dr. Ann McKee and her team at Boston University just announced a biomarker they believe is linked to CTE. They found significantly higher amounts of an inflammatory protein, CCL11, in the brains of deceased patients with CTE than in those without the condition. The more years a patient had played football, the higher the levels of CCL11 they found.

“Inflammation is normally a very helpful response in the brain, but when it goes on and persists for a long time, and gets out of control – that’s what we think happens in CTE,” McKee explained.

The potential benefits of detecting CTE in living athletes

These findings are big steps to detecting this brain disease in athletes while they are still playing. Within a few years, we could be able to detect CTE, offer recommendations for retirement and even treat the condition.

Other studies this month provide helpful information for youth and high school athletes and their parents about concussions.

Brain impairments after concussions – even after symptoms resolve

Researchers studied young athletes between the ages of 13 and 18 treated for sport-related concussions. They performed computerized neurocognitive testing on the athletes, all of whom had said their symptoms were completely gone. Over 28% of them still had impairments on the computerized tests.

This study points to the value of baseline and post-injury computerized testing as part of the management of concussions. It also suggests we need to be extra cautious in returning an athlete to play as soon as he or she claims to be symptom-free.

Concussion symptoms after returning to exercise

As part of the treatment for concussions, most doctors prescribe a period of both physical and mental rest. Another study this month showed that after adolescent athletes were allowed to exercise, 12% of them showed a recurrence of symptoms. Athletes with a longer duration of symptoms and a previous undiagnosed concussion were more likely to experience a recurrence.

Studies like this one will help us tailor our return-to-play protocols to get athletes back to play as quickly as possible, but also as safely as possible.

Also read:
Head injuries in football: How and when concussions occur

The future of CTE and concussions

Note: A modified version of this article appears as my sports medicine column in the November 24, 2017 issue of The Post and Courier.