What we can learn from Derek Jeter about lifting up others

Derek Jeter was one of the all-time great New York Yankees baseball players. He played his entire 20-year career with the club. He won five World Series championships. He is the team’s all-time leader in hits, stolen bases, at-bats and games played. He was a 14-time All-Star and five-time Golden Glove winner at shortstop. He ranks sixth in Major League Baseball history in career hits.

As great a player as Jeter was, he was an even better leader. His ability to lift up other members of his team was unmatched.

Even before Derek Jeter was a Yankees superstar, the shortstop from Kalamazoo, Michigan showed signs that he cared more about the team than his own statistics. While a minor-leaguer in Greensboro, North Carolina, he played alongside future Yankee Hall of Famer Mariano Rivera. One season, the pitcher was returning from elbow surgery. Jeter would keep track of the Rivera’s pitches and encourage him to preserve his arm.

While in the minors, Jeter made a large number of fielding errors at shortstop. One season in which he made over 50 errors, he had a teammate at first base named Nick Delvecchio. The first baseman often lost Jeter’s throws from shortstop in the poor lighting at War Memorial stadium, accounting for a number of those 50-plus errors attributed to Jeter.

Derek never complained or criticized Delvecchio. After such a mistake, Jeter would walk over after the inning and say something supportive like, “Hey, don’t worry about it.” His teammates loved playing with him in the minor leagues, and that leadership continued once Jeter made the New York Yankees. Several years into the league, Derek Jeter was named captain. 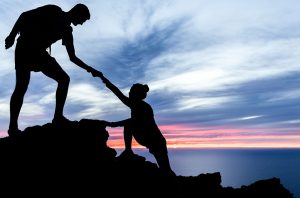 How can we lift up our teammates and others close to us like Derek Jeter?

We can all lift up others in the same way. As a student, you can offer to study with a struggling classmate or teach some difficult material. As an athlete, we can console a teammate who misses a shot or has a bad game. In the office, we can help a co-worker with some research for a presentation. We can even just pick up a snack from the vending machine if we are grabbing some food for ourselves.

This quality – doing what you can to help and support people around us – is a hallmark sign of a leader. More importantly, the friendship it builds will only make the team and organization stronger.

In this video, I discuss ways that we can all lift up others. Whether we are coaches or the athletes on a team, or we are the CEO or we just answer the phones at the company, we can all do a little bit every day to improve the work and lives of those around us.

Source: The Captain: The Journey of Derek Jeter by Ian O’Connor

What you can learn from Liverpool manager Jurgen Klopp about teamwork

Episode 87: Why are energy drinks potentially dangerous for young athletes?