Years ago, one of my favorite patients suffered a concussion while playing soccer in college. She missed an entire semester of classes trying to recover. A friend of mine has a son who suffered a concussion and missed a semester of high school. Both young athletes struggled to recover. One point of their treatments interested me. Neither was allowed by their doctors to exercise after their concussion. When I read a new study about the benefits of early exercise after a concussion, I knew I need to share it with athletes, parents and physicians in my latest newspaper column.

New research brings good news to the 1.1 million to 1.9 million American kids who suffer sport-related concussions each year. The typical medical recommendations – absence from school, long days in dark rooms with no phone or electronics use, and most importantly, strict avoidance of physical activity – might soon go the way of “Take two aspirin, and call me in the morning.” 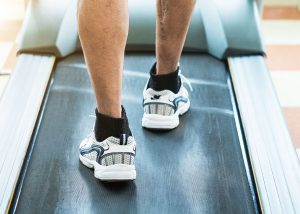 A “landmark study” about exercise after a concussion

In the new study published in the February 4 issue of JAMA Pediatrics, researchers at the University of Buffalo found young athletes recovered from concussions more quickly when they started a supervised program of aerobic exercise soon after the injury.

A journal editorial that accompanied the paper called the research “a landmark study that may shift the standard of care.”

Traditional treatment for an athlete after a concussion

Traditionally, doctors have prescribed concussed children and adolescents near-complete rest, including shutting them down from almost all physical and mental activity. But as many parents of young athletes know, this advice, especially since it keeps them away from their friends and out of their usual activities, can be very difficult on the kids.

Prescribed exercise based on heart rate and symptoms

For the study, John J. Leddy, M.D. and Barry S. Willer, Ph.D., followed 103 young athletes who sustained a sport-related concussion. These athletes were evaluated an average of five days after the injury. The research team randomized the athletes into an aerobic exercise group and a control group that only did stretching.

Athletes were given the “Buffalo Concussion Treadmill Test” each week. Each athlete walked on a treadmill that increased in difficulty until he or she developed concussion symptoms. The researchers noted the heart rate at which the athlete’s symptoms began. For athletes in the exercise group, they prescribed exercise that could be performed at up to 80 percent of that heart rate for 20 minutes. Each week, the amounts of exercise or stretching were adjusted based on their latest treadmill test.

Recovery from a concussion with or without exercise

Patients prescribed aerobic exercise after their concussions recovered in an average of 13 days, compared with 17 days for the controls. Perhaps more surprisingly, only four percent of the exercise patients took longer than four weeks to fully recover. Usually 15 to 25 percent of concussed athletes prescribed rest take longer than four weeks to recover.

The challenges of delayed concussion recoveries

School-aged children with prolonged recoveries can be particularly problematic, as they often struggle with academic work, miss long periods of time from school, and become depressed.

Also read:
Repeat concussions and immediate removal from play after a concussion

The shift in concussion management

The message from this research for athletes, parents and doctors is clear. Isolating a kid and removing him or her from most activity after a sport-related concussion doesn’t help their recovery. It might actually be harmful. Getting the athlete to start even light exercise might help them return to normal faster.

While this study only examined the role of early exercise after a concussion, concussion experts are beginning to shift their recommendations for school and the use of electronic devices as well. In particular, a 2018 advisory statement from the American Academy of Pediatrics’ Council on Sports Medicine and Fitness notes that most children and adolescents who suffer concussions can return to school after missing only one to two days, even if they have symptoms. Small, temporary changes in course work or environment might be necessary.

Take home message for parents about early exercise after a concussion

Parents of a young athlete who suffers a concussion should take him or her to see a physician skilled in concussion management. That doctor can hopefully guide the athlete through an exercise program that can be done at home or in a physical therapy clinic. If they don’t have access to a specialist with a concussion rehab program, the athlete might be able to start light walking as long as it doesn’t trigger symptoms like headaches.

Dr. Willer, a psychiatry professor and Director of Research at the University of Buffalo Concussion Management Clinic, explained, “It’s exercise at a level that does not bring on symptoms – and that’s really important. If people are going to exercise too much, they’re going to make themselves sick.”

“Until now, nothing else has been proven in any way effective for treating concussion,” Willer argued in a press release. “This is the best evidence so far for a treatment that works.” In my opinion, this shift to early exercise after a concussion is a potentially enormous advance in how we treat young concussed athletes, and it could help millions recover from that injury more quickly than ever.

Note: A modified version of this article appears as my sports medicine column in the March 15, 2019 issue of The Post and Courier.