For my newspaper column this week, I decided to tackle a subject I’ve thought about quite a bit. To be honest, I have wanted to get rid of kickoffs in football for years. Mainly I just find them boring. Over the course of a few minutes, all the players line up, kick the ball down the field, and the returner elects not to run it back. The few touchdowns rarely make up for the routine delays in getting to the real action. 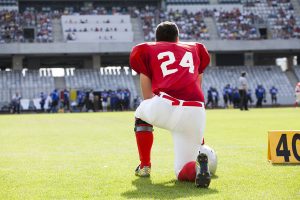 I’m addressing kickoffs now because I realize they pose a real injury threat to players. To me, it just doesn’t make sense to keep kickoffs in the game. Here are my arguments for eliminating kickoffs.

Only seconds into a Week 5 NFL game, Kansas City Chiefs safety Steven Terrell blocked for Akeem Hunt on the game’s opening kickoff. Jordan Todman accidentally kicked him in the head as he tried to make the tackle. Terrell laid motionless on the field for minutes before the medical staff took him to the sidelines. Doctors diagnosed him with a concussion. Terrell still has not returned to play.

In a poll on debate.org, only 16% of fans believe the NFL should ban kickoffs. I realize I’m clearly in the minority. I’m not overreacting to one injury, though.

Former Rutgers defensive lineman Eric LeGrand was paralyzed, on a kickoff. In high school football, 11 players died during the 2015 season. Seven of those deaths resulted from on-field injuries. Three of those seven fatal injuries occurred during kickoffs.

In recent years, the NFL has adopted rule changes to make kickoffs safer. In 2011, the league moved kickoffs from the 30-yard-line to the 35, making it harder for teams to return kicks, since many more would travel deep into or through the endzone. In 2016, when a receiver took a touchback, his team received the ball at the 25-yard line instead of the 20, giving returners an incentive not to return the kick.

In response to that change, coaches voiced their displeasure. Many of them vowed to have their kickers intentionally kick the ball short of the endzone to try to tackle the returner short of the 25, knowing it could increase the risk of injuries. In fact, Steven Terrell suffered his concussion on that exact type of kickoff.

When the NFL advanced the placement of the kickoffs from the 30 to the 35-yard-line, the league successfully increased the number of touchbacks. Instead of the roughly 2100 kickoffs returned the season before, returners only brought back 1385 the season after the change. NFL commissioner Roger Goodell claimed the change decreased concussions 40%.

Despite moving up kickoffs, advancing the placement of the ball after touchbacks and other changes like ending wedge blocking and wedge busting, I believe we are only delaying the inevitable elimination of kickoffs. Plus, as New England Patriots head coach Bill Belichick observes, players can get hurt blocking on kicks that end in touchbacks.

Time to eliminate kickoffs from football at all levels

For a sport that professes concern over concussions and brain damage, getting rid of kickoffs will have a much bigger impact than rules about targeting or defenseless receivers. If the NFL led the way, college, high school and youth football would quickly follow suit.

The NCAA Division I Football Oversight Committee and the American Football Coaches Association have discussed eliminating kickoffs, although no change will come to college football until at least the 2018 season. At the youth level, Pop Warner ended kickoffs for its three youngest divisions in 2016. 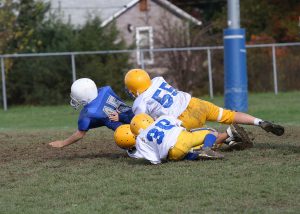 Removing kickoffs would also reduce the overall number of hits players take over the course of a season and career. Teams would have no reason to practice kickoffs, ending all the collisions from blocking and tackling on these plays. Those repetitive hits are the ones brain experts fear lead to CTE and long-term brain damage.

Also read:
Head injuries in football: How and when concussions occur

Most players, coaches and fans who want to keep kickoffs believe they are exciting. I disagree. About two-thirds of NFL kickoffs result in touchbacks now. Of the one-third of kicks that are returned, only 0.6% of them resulted in touchdowns in the 2015-16 season.

If you’re concerned about losing onside kicks, I’ll give you two alternatives. One, the kicking team announces they are trying an onside kick. Onside kicks are almost never a surprise anyway.

Or the league could adopt an idea floated by Goodell. The team which just scored could get the ball back at the 30, but it would be fourth down with 15 yards to go. They could punt the ball or go for it. If they fail to convert the fourth down, the “returning” team gets the ball at that spot.

Time to make football safer for the athletes

I don’t understand how a sport supposedly so committed to the safety of the athletes could keep such a dangerous play. It’s time to make a real difference and eliminate kickoffs from the sport.

Note: A modified version of this article appears as my sports medicine column in the October 19, 2017 issue of The Post and Courier.

Touchback rule had little to no impact on injuries on kickoffs. By Michael David Smith. Pro Football Talk. January 26, 2017.

It’s time to finally get rid of the most dangerous play in football. By Steven Ruiz. USA Today. July 26, 2016.

The NFL should stop messing around and just get rid of kickoffs. By Rodger Sherman. SB Nation. April 12, 2016.

Should the NFL ban kickoffs? Debate.org.