Concussions in soccer: The World Cup again shows FIFA must do better

As far as concussions in soccer go, maybe the 2018 World Cup was better than the previous tournament. In 2014, it seemed like there were far more examples of concussed players on the field when they shouldn’t have been. But the latest tournament had two episodes in which team doctors seemed to ignore concussion protocols. I share my frustration with FIFA and soccer in my latest newspaper column.

VAR or concussions in soccer: Which is the bigger story?

The use of video assistant referee (VAR) will be one of the legacies of the 2018 World Cup. This year’s event should instead prove once and for all that FIFA, soccer’s governing body, doesn’t care at all about the health of the players. 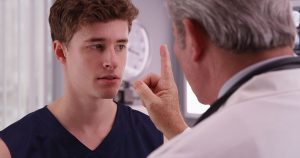 In the first of the two semifinal matches, Belgium’s Eden Hazard collided with France midfielder Blaise Matuidi. Matuidi’s teammates looked on with concern as he was clearly dazed by the blow. Team doctors looked at him before taking him off the field. Despite what clearly looked like a concussion, Matuidi was back on the field 15 seconds later.

Within one minute, Matuidi collapsed to the pitch.

Teammates tried to help him up, but he was obviously disoriented. As the medical staff helped him off the field, this time for good, Matuidi sprayed water from a bottle they gave him. He missed his mouth.

ESPN’s Taylor Twellman blasts FIFA over its handling of concussions

ESPN commentator Taylor Twellman, whose own soccer career ended due to head injuries, immediately blasted FIFA for Matuidi’s injury. “The World Cup is bigger than any stage. What we have seen is hypocritical, pathetic and a straight middle finger to the players.”

Matuidi started the World Cup final Sunday, only five days after collapsing. France’s team physicians insisted he didn’t have a concussion. FIFA’s guidelines state that a player diagnosed with a concussion should be kept out of action for at least six days. Even if Matuidi did have a concussion, the team could have ignored this rule and let him play anyway.

That exact scenario played out earlier in the tournament.

In Morocco’s opening match, midfielder Noureddine Amrabat suffered a concussion after clashing heads with an Iranian player. Video of the match showed Moroccan team officials spraying water and slapping the player in the face, apparently to try to arouse him.

Amrabat spent 24 hours in the hospital and underwent a brain scan. He admitted that he has no memory of the match or the hours after it.

I thought FIFA learn its lesson from the last tournament. In the 2014 World Cup final, German midfielder Christoph Kramer was crushed by an Argentina defender. Like with Matuidi, team doctors did a quick exam before letting him back on the field. Just 14 minutes later, he collapsed. After the game, Kramer told reporters he had no memory of the first half, his injury or how he got off the field.

FIFA medical chief Michel D’Hooghe expressed outrage over the actions of the Moroccan officials, admitting they failed to follow concussion guidelines. “FIFA has no authority over this. We produce the guidelines, but it is the team doctors who make the decision.”

Also listen:
Episode 152 of The Dr. David Geier Show: Should FIFA change its policies on concussions in soccer?

Ignoring the guidelines for return to play, Amrabat took the field against Portugal only five days after the concussion that erased his memory and required a hospital stay. The player wore a padded skullcap but took it off because he was too hot.

Morocco team doctor Abderrazak Hefti claimed he wouldn’t allow the player to even train for a week. Amrabat told the media he overruled the doctor. One of the Moroccan coaches, Herve Renard, lauded him as a “warrior.”

The Dark Ages of sports medicine?

After the final, Chris Nowinski, Ph.D., founder and CEO of the Concussion Legacy Foundation, tweeted he will miss the World Cup because it shows the world what not to do after a suspected brain injury. “We are watching the Dark Ages of sports medicine.”

How can FIFA be so oblivious to this issue? It has to recognize the terrible example these events set for the hundreds of millions of people watching around the world. Concussions in soccer are a serious health concern, and FIFA seems to be looking the other way.

Also read:
Girls soccer injuries: Time to recognize the importance of concussions and ACL injuries in the sport

Steps FIFA needs to take on concussions in soccer now

I always thought the NFL was behind when it came to head trauma. But the NFL is light-years ahead of FIFA. At least football has placed independent neurologists on the sidelines and athletic trainers serving as concussion spotters in the press box. Soccer must take those steps immediately.

We also need to remove pressure on the coaches and doctors to rush a player back on the field. Allowing a temporary fourth substitution for concussions so a team doesn’t have to play with down a player for the 10 minutes it takes to do a thorough exam would be a good start.

FIFA must penalize any team who blatantly ignores concussion guidelines for evaluation or return to play. A fine isn’t enough. It needs to be some penalty that makes it more difficult for that country to advance to the next round or qualify for the next tournament.

I don’t know if we’re watching ignorance on FIFA’s part or intentional neglect. One thing seems clear. FIFA clearly chooses to protect the game on the field at the expense of the health of the athletes needed to play it.

Note: A modified version of this article appears as my sports medicine column in the July 18, 2018 issue of The Post and Courier.

Germany’s Christoph Kramer ‘can’t remember’ first half of the World Cup final after blow to the head. By Nick Schwartz. USA Today. July 14, 2014.