Recently I posed nine changes that would make football safer without radically altering the sport. While most of the feedback I received was positive, naysayers took issue exclusively with one of my ideas.

Kids should not play tackle football before age 14. 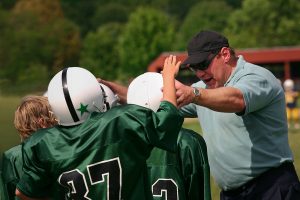 A ban on tackle football for kids is coming

Before I lay out the arguments against tackle football before high school, let me point out the obvious (at least to me). A ban on youth tackle football is coming. It’s going to happen soon.

Last week, legislators in New York and Illinois proposed laws to ban tackle football at the youth level. I expect states across the country to follow suit in the coming years.

Last month, researchers from Boston University published a study showing CTE in teenage athletes who had been exposed to repeated head impacts. The study offers compelling evidence that CTE is not just a risk for NFL players.

The need to reduce the number of head impacts kids suffer

With a decade of research on CTE and long-term brain damage in football, it’s clear that the risks are based on how long an athlete plays the sport and how many repetitive impacts he takes. If you cut down on the number of years of play, you significantly decrease the number of head impacts and risk of later brain degeneration.

While other sports involve head impacts, football players by far withstand the highest number. Almost all young players absorb at least 100 per season. Most receive 500 or more per season.

The risks of behavioral and neurologic issues later in life

We now know those head impacts have a detrimental effect on kids’ brains. Football players who start playing before age 12 are three times more likely to develop depression and twice as likely to have issues with behavior and impulse control as an adult.

Efforts to reduce brain impacts in other sports

Other sports have stepped up efforts to decrease head impacts. USA Hockey eliminated body checking until age 13. US Lacrosse made any stick contact to the head a penalty at the 14 and under level. US Soccer removed heading for players under age 11 and limited heading in practice until age 14. 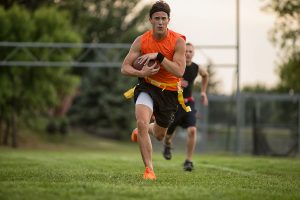 Tackle football is not necessary for young athletes

Don’t use the argument that tackle football is necessary to teach kids discipline and teamwork. All team sports can instill positive virtues. The same goes for the argument that kids need the exercise. They can stay in shape playing all kinds of sports. In fact, not being 250 or 300 pounds and instead being light and fast enough to play flag football is probably better for their health. And tackle football is not the only sport or activity that can occupy kids and keep them out of trouble.

Parents choosing whether to let their kids play tackle football

Parents can decide if they want to expose their kids to the risks of head impacts and possible behavioral and neurologic problems later in life. Clearly many have decided tackle football isn’t worth the risk. Participation has dropped almost 30 percent between 2008 and 2016.

The multi-billion-dollar football industry seems more concerned with its viability and financial interests going forward than the health of kids, telling parents that football is safe despite overwhelming evidence that it’s not. Rather than finding real solutions, leaders of USA Football seem more concerned with “changing the narrative.”

Is it time for the government to step in and ban youth tackle football?

I’ll be honest. I’ve never been a fan of government regulation of anything. Just as the government has done with ages for car seats, smoking and drinking alcohol, protecting young kids must be our main concern. We must limit the head impacts that can lead to neurologic and behavioral problems, suicide and violence. Whether the NFL and USA Football voluntarily switches completely to flag football for kids or the government steps in, it’s time to retire youth tackle football.

Note: A modified version of this article appears as my sports medicine column in the February 8, 2018 issue of The Post and Courier.