Is a radical new football helmet design the answer to preventing concussions?

Note: I have written several newspaper columns about the idea of a new football helmet with the latest technology preventing concussions. Generally, I have been skeptical that any helmet can prevent concussions. I still feel that way for many reasons, but I do applaud football and helmet companies for at least continuing to research better ways to protect the brains of athletes. In my latest column for The Post and Courier, I examine a new helmet that offers some promise.

“No helmet can prevent head, brain, or neck injuries, including paralysis or death, a player might receive while participating in football.”

These words comprise the first sentence of the Warning page of the website of VICIS, a Seattle-based startup looking to remake football helmets and possibly the future of the sport.

The players and the game have changed, but the football helmet hasn’t changed much

Much has changed about football over the years. Players are bigger, stronger and faster. The game emphasizes more high-speed passing attacks. The protective equipment, and helmets in particular, have not really changed since the 1960s.

Helmets have consisted of plastic outer shells with some degree of padding inside the shell since the addition of the facemask. Sam Browd, a neurosurgeon who heads up the Seattle Sports Concussion Program, partnered with Per Reinhall, the chair of mechanical engineering at the University of Washington and businessman Dave Marver to bring technological innovation to this head protection.

Since Browd and his team founded VICIS in 2013, the company raised almost $30 million, including a $500,000 grant from the NFL, to create a better helmet. The company has spent tens of millions of dollars in the last few years to produce and promote its Zero1 helmet. 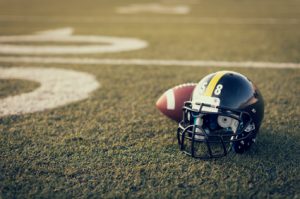 Imagining a football helmet as a car bumper

Unlike traditional helmets, the Zero1 has an outer shell that deforms on impact before popping back into place. You can create an indentation when you push down on it with your finger. This outer layer serves to absorb impact much like a car bumper does in an automobile accident.

Inside the outer shell is a layer of bendable vertical struts designed to absorb forces from multiple directions. Inside that layer is a thin plastic shell with memory foam to conform to the athlete’s head.

The release of the Zero1 comes soon after the National Operating Committee on Standards for Athletic Equipment (NOCSAE) adopted a new performance standard for helmets that incorporates not only linear forces but also rotational accelerations into its pass/fail specifications.

Last week, performance testing by independent biomechanical experts chosen by the NFL and NFL Players Association found that the Zero1 reduced head impact severity better than any of the 33 helmets tested. VICIS claims that 25 NFL teams and at least 20 college football teams will use the Zero1 helmet in the upcoming season.

Also read:
Teaching kids to recognize the significance of concussions: An interview with Michael Timothy Duerson

It will be interesting to see how athletes respond to the new design. Players at the University of Washington and University of Oregon tried the helmet during the preseason last year. Many complained of headaches and discomfort wearing the new helmet. VICIS adjusted the Zero1 based on that feedback and claims it has resolved those issues.

Are these helmets too expensive for kids and schools?

If these helmets do prove popular at the top levels of the sport, will they play any role in high school or youth football? The Zero1 currently costs $1500. While VICIS plans to release a more cost-friendly helmet for youth athletes in the future, $1500 is probably too much for many families. High school programs, many of which cannot afford to hire a full-time athletic trainer, probably can’t afford these helmets for 50 or 100 kids. 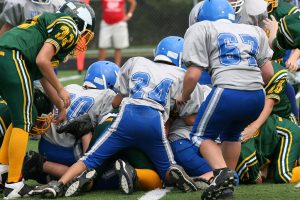 Will these helmets reduce the numbers and severity of concussions?

Most importantly, we need to see whether these helmets actually decrease the rates and severity of concussions and the long-term effects of repetitive subconcussive blows in the sport. While no helmet can prevent every concussion, years of research from their use on the football field will eventually show us if they better protect the players’ brains.

With news this week that Tom Brady and Calvin Johnson may have hid concussions from doctors and coaches, it’s clear that we need to find a way to prevent the injuries from occurring in the first place. Maybe a radical new helmet can do it.

In my latest book, That’s Gotta Hurt: The Injuries That Changed Sports Forever, I examine brain injuries in sports and examine the issues that

parents need to recognize when their children play football, soccer and other collision sports. If you have kids who play football, or you’re a football fan yourself, you need to read it. Get your copy now!

Note: A modified version of this article appears as my sports medicine column in the May 25, 2017 issue of The Post and Courier.

References:
The Football Helmet Just Got the Biggest Redesign Since the 1960s–and It’s Coming to the NFL Next Season. By Kevin J. Ryan. INC.com. May 12, 2017.

How This Seattle Startup Created the Helmet That Could Save Football. By Kevin J. Ryan. INC.com. February 5, 2016.