Will insurance companies decide the future of football and other contact sports?

It’s been a month since ESPN.com published an article detailing how much trouble the NFL and youth football organizations are having getting insurance companies to cover them from liability stemming from brain trauma. I expected a lot of reaction from football insiders shooting the idea down that insurance companies could be a threat to the very existence of football, but it hasn’t happened. I haven’t heard many ideas to fix the problem either. Maybe it won’t be a big problem, or maybe it will bring down the sport. I discussed it in my latest newspaper column.

What happens if football can’t get insurance?

“People say football will never go away, but if we can’t get insurance, it will.”

That quote from the executive director of the largest youth football organization in the U.S., Pop Warner, appeared in a recent ESPN Outside the Lines article by Steve Fainaru and Mark Fainaru-Wada. They detail a growing concern for the sport of football and many contact sports.

I understand the medical side of this issue, but I’m not versed on the legal or insurance aspects. Since this article appeared, I have read a number of articles quoting experts in those fields. I’ll do my best to explain the legal and insurance ramifications as I understand them.

As Fainaru and Fainaru-Wada describe for Outside the Lines, historically at least a dozen insurance companies covered football. Due largely to concerns over concussions and CTE, the long-term brain damage first described in a former NFL player in 2002, now only one carrier is willing to provide Worker’s Compensation insurance to the NFL. The NFL no longer has general liability insurance that covers brain trauma.

Likewise, Pop Warner could only find one insurance carrier to cover the organization for head trauma. 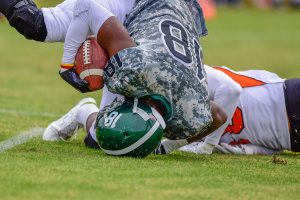 Leagues across the country are facing mounting insurance costs

Leagues in towns across the country face similar insurance challenges. ESPN cites the Hawkins County, Tennessee recreation department as one struggling with the insurance crisis. Its previous insurer decided to stop covering football. The department managed to find another carrier, but the cost of the policy increased dramatically.

When Pop Warner signed an agreement with the lone insurance company willing to cover head trauma, that carrier insisted on a one-year policy. In theory, that company could continue to drastically increase the cost of the policy and increase the deductibles, much as the NFL’s single insurance provider did when the league renewed its policy.

If the cost of insurance for youth football continues to increase exorbitantly, many leagues won’t be able to afford it. They could try to raise the fees parents pay for their kids to play. But the fees could rise so high that only wealthy families could afford them. These are largely the families who have already been pulling their kids out of the sport.

Could football survive with no insurance companies covering the leagues?

What if these last insurance companies decide to stop covering the NFL or tackle football at any level? The NFL, with annual revenues approaching $20 billion, could probably self-insure. Youth organizations and local rec departments couldn’t. In that case, they would either pay the damages from lawsuits themselves, out-of-pocket, or they would go out of business.

The risk isn’t just for football. Fainaru and Fainaru-Wada suggest hockey and soccer could face similar insurance challenges. Honestly, it will be a question facing all contact sports. USA Water Polo faces a class-action lawsuit for allegedly failing to protect athletes sent back into games after suffering concussions.

Insurance companies and the uncertainty of CTE and brain damage

Why are insurance companies now excluding head trauma or pulling out of the football business completely? Uncertainty. There is tremendous uncertainty on what the extent of future liability will be. Will there just be a handful of former players who develop CTE? Or will insurance companies be responsible for covering judgments and settlements totaling $1.8 billion a year, like it does now with asbestos-related claims?

The problem is that CTE often develops decades after the inciting trauma. While some legal experts believe that the lack of a definitive link between football and CTE and the low number of CTE cases will keep future payouts low, others wonder what happens if football gets linked to the far more common Parkinson’s disease and Alzheimer’s disease. The financial implications could be staggering.

The insurance companies could work to make football safer

Instead of pulling away from the sport altogether, insurance companies could try to decrease their risk by forcing behaviors to make the sports safer, much like what they’ve done with fraternities.

Insurance companies largely set policies for fraternities that specify strict restrictions on alcohol, policies that fraternities mostly ignore. Should an accident occur at a party violating the alcohol policy, the insurance company is off the hook. The students involved and their parents are then potentially responsible for the six- and seven-figure verdicts.

Carriers willing to cover football could require changes to make the sport safer – medical education of coaches, athletic trainers present at every game and practice, mandatory neurocognitive testing, even a ban on tackling – as part of its efforts to allow football to continue but still mitigate the risk.

This insurance issue could be anything from a temporary setback for football to the biggest threat to the sport’s survival. It will be interesting to see how it shakes out.

Note: A modified version of this article appears as my February 27, 2019 sports medicine column in The Post and Courier.

Will Insurance be the Death of Football? Market Constricts Amid Brain Injury Concerns. By Brendan N. Gooley. The National Law Review. January 30, 2019.

For the NFL and all of football, a new threat: an evaporating insurance market. By Steve Fainaru and Mark Fainaru-Wada. ESPN.com. January 17, 2019.

The Dark Power of Fraternities. By Caitlin Flanagan. The Atlantic. March 2014.