The iliotibial band (IT band) is a band of tissue that runs from the pelvis to the top of the tibia along the outside of the thigh. IT band syndrome is a frequent source of pain in runners, but it can affect athletes in other sports as well.

Causes of IT band syndrome

The pain arises from friction between the iliotibial band and the lateral femoral epicondyle. Runners develop this problem as an overuse injury, and it is thought that hills and banked surfaces, such as running on the beach, can contribute to the symptoms. It’s also thought to be a problem seen more frequently in athletes who have a varus alignment to their knee, or more simply, are bowlegged.

Most runners have dealt with IT band issues at some point in their running careers, and often they note that it goes away on its own. If the pain and snapping persist, I usually recommend that they see a sports medicine physician to confirm the diagnosis or work with a physical therapist. Examination typically reveals very localized tenderness on the outside of the knee above the joint, along the lateral femoral epicondyle, which is a bony prominence on the outside of the knee. Often flexing and extending the knee while feeling this bony area can reproduce a snapping sensation. The iliotibial band can be felt to snap back and forth across the bone. 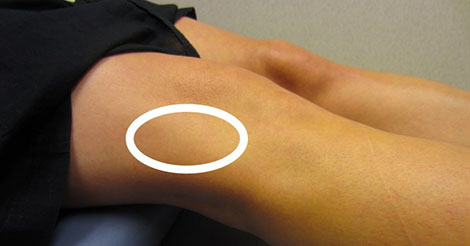 Treatment options of IT band syndrome

Fortunately treatment is almost always nonsurgical. As I said, runners often note that this problem resolves on its own. Anti-inflammatory medications and ice to the painful area are often enough to help resolve the problem. Occasionally working with a physical therapist for stretching exercises for the IT band can be helpful. Sometimes the physical therapist can determine whether orthotics for the shoes that might decrease pressure on the outside of the knee might be helpful. If the symptoms continue to aggravate the runner despite anti-inflammatories, stretching, and ice, occasionally I will try a cortisone injection into the affected area. The cortisone doesn’t go into the knee joint but is injected into the IT band at the lateral femoral epicondyle. Almost always the cortisone injection helps decrease the inflammation between the Iliotibial band and the bone at this area and helps the symptoms go away. Very rarely surgical treatment to release a small portion of the iliotibial band at this area is needed.

IT band syndrome: Common cause of knee pain in runners and cyclists