It has been a while since I wrote about the importance of athletic trainers. In the past, I have explained why they are important for management of medical emergencies, how they help all athletes, even non-injured ones, and more. Check out the links to those articles below. I read a couple of recent studies that led me to think it’s again time to argue why it’s so important that high schools have access to full-time athletic trainers. I discuss those thoughts in my latest newspaper column.

The last few years have brought widespread media attention to concussions. Most of the focus has been on pro and college sports, but head injuries are just as important in high school sports.

Unlike the college and professional stars, high school athletes often have much less access to the primary medical provider who can evaluate them for concussions – the athletic trainer.

Over 7 million athletes play high school sports in this country. Roughly 340,000 concussions occur in sports each year. That number is probably much lower than the real one. Many experts believe that up to 50 percent of concussions go unreported. 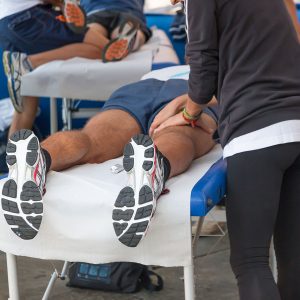 The importance of athletic trainers in concussion evaluation and management

Numerous medical organizations recommend that high schools employ full-time athletic trainers to provide medical care for the athletes. Athletic trainers are critical to identify a concussed athlete, evaluate the injury, provide care, arrange for a doctor’s evaluation, and ensure the athlete does not return to play before he or she is ready.

Without an athletic trainer at practices or games, the medical care falls upon the coaches who have little training in diagnosis and management of head injuries.

Availability of athletic trainers affects the reporting of concussions

In schools with low levels of availability of athletic trainers at practices and games, the incidence of concussions was much lower than at the schools where athletic trainers were more often present. Understand that a lower rate doesn’t mean there were fewer concussions. The injuries just weren’t reported to anyone, and therefore not treated.

The length of time between the concussion and when the young athlete finally received medical evaluation was much greater at these schools. And since the athletic trainer was less often available, there was less communication with parents and coaches. These interactions are crucial to keep the athlete from returning to play too early, potentially suffering more injuries and having longer recoveries.

The National Athletic Trainers Association and the Korey Stringer Institute have shown that 70 percent of U.S. high schools have access to an athletic trainer in some way, but only 37 percent of them have access to one full-time.

In Wisconsin, experts have shown that schools which lack athletic trainers are most often in counties with low median household incomes. I suspect that the schools in poorer, more rural counties in most states struggle to find athletic trainers to care for their kids.

How do we ensure that all high schools, especially those in rural areas, have access to full-time athletic trainers?

State legislators could pass a bill making the availability of athletic trainers mandatory. I imagine passing such a bill would not be difficult. The bigger challenge in creating such a law would be figuring out who would pay for those athletic trainers.

Another rule that has been suggested frequently over the years is more controversial. If a school cannot hire an athletic trainer or have one at every game and practice, that school could be withheld from competing in contact or collision sports. A variation of that rule would just force the school to drop football if an athletic trainer could not cover every football game and practice. Since sports offer many health, academic and social benefits, that rule could be detrimental to the kids.

Many schools can afford to hire athletic trainers, but to do so, they must also teach. Athletic trainers often work from early afternoons until well into the night, plus weekends. Having them arrive early in the morning and teach all day before sports will drive most of them away.

Finally, schools can partner with hospitals and sports medicine clinics, who provide athletic training coverage for free or a low price in exchange for getting many of the injured patients. That is the model followed by most schools in Charleston and much of the United States. That option, though, is much more difficult for schools in rural areas.

Regardless, we need to find ways to help schools hire athletic trainers so that we keep young athletes as safe and healthy as possible.

Note: A modified version of this article appears as my sports medicine column in the January 10, 2019 issue of The Post and Courier.