What you can learn from Jerry West about blame

Jerry West is an icon of basketball. His silhouette is part of the NBA logo, in fact.

As the general manager of the Lakers, West managed to bring both Shaquille O’Neal and Kobe Bryant to Los Angeles, ushering in a decade of dominance and many championships.

As a player, West was selected as an All-Star 14 times. He is the only player voted Most Valuable Player of the NBA Finals despite playing for the losing team. And he won an NBA championship with the Los Angeles Lakers in 1972.

Jerry West agonizes over his six losses in the NBA Finals

West and the Lakers made the NBA Finals nine times during his playing career, so only winning once might seem like a disappointment. Of course, six of those losses came at the hands of the legendary Boston Celtics and superstar Bill Russell. That fact still haunts Jerry West today.

West always believed that there was more he could have done to help his team win. He believed he should have done more. He understood that the Celtics were clearly more talented, as Russell often reminded him. West just couldn’t accept that he could not will the Lakers to victory over Boston in some of those series. 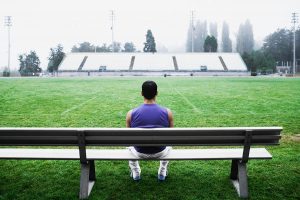 Decades later, West had the opportunity to talk to John Wooden about those Finals defeats. Wooden led his UCLA Bruins to 10 national championships as head coach. As Jerry described in his autobiography West by West, Wooden offered his perspective on the criticism West inflicted upon himself.

“When your team won, did you take all the credit?” Wooden asked. West replied that he did not.

“Well then, Jerry, when your team lost, there is no reason for you to take all the blame.”

The devastation we often feel from defeat or failure

For many top athletes and top performers in business, the disappointment of defeat or failure devastates them much more than winning thrills them. Very often when we fail – whether it’s losing a client, missing out on a promotion, or even getting fired – we are extremely hard on ourselves.

What could we have done differently?

Sometimes the introspection that follows can be helpful. Was there something we could have done differently? If we know what we did wrong, we won’t make that mistake again. We can use the setback as a tool to improve.

We must be careful, though, not to obsess over the failure and let it define us. That defeat can’t become an obstacle that paralyzes us and prevents us from moving forward.

Failure of a team or organization

As John Wooden pointed out to West, we shouldn’t blame ourselves for the failure of an entire team or organization. Rarely are we the sole point on which an entire endeavor depends.

If our company’s new product fails to meet our sales expectations or those of the market, there are likely a large number of reasons that product failed. Yes, there might have been one or two actions we could have taken that might have helped. But we can’t hang the entire failure around our neck.

I share Wooden’s advice to West to encourage you to maintain perspective when challenges at work or in your personal lives don’t go your way. Yes, take a short amount of time – hours, or maybe a day or two at most – and figure out how you can improve next time. Just don’t let it haunt you or paralyze you.

What you can learn from Pete Carroll about having a philosophy

What we can learn from John Wooden about positive teaching

What you can learn from U.S. soccer star Carli Lloyd about failure