Larry Fedora rants on CTE, football and the future of our country

I have been asked for my thoughts on numerous radio interviews in the past few weeks. All of the hosts wanted to know my opinion on Larry Fedora’s comments about football not causing CTE. I waited to see what the reaction was before offering my response in depth. As you will see in my latest newspaper column, it’s not a black or white issue.

Roughly two weeks have passed since University of North Carolina coach Larry Fedora made controversial comments about football and CTE at ACC Media Days. Having seen the strongly worded opinions on both sides, I’d like to offer my perspective on three key points – Fedora’s view on CTE, his view on football and its role in the country, and at whom exactly he is lashing out. 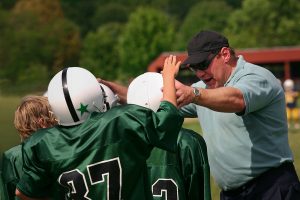 Let’s start with the most controversial statement. “I don’t think it’s been proven that the game of football causes CTE,” the Tar Heel coach stated. You might be surprised to read that I don’t think he is entirely wrong.

This is a difference between causation and association. Even the scientists doing the studies acknowledge that we cannot conclude football causes this long-term brain damage. There is clearly an association with the sport and CTE, especially among former NFL players who played the sport for a decade or more.

While admittedly a biased sample because the families chose to donate the patient’s brain due to symptoms exhibited later in life, scientists at Boston University found that 110 of the 111 brains of former NFL players they studied at autopsy had CTE.

There is clearly a link between football and its repetitive blows to the head and CTE. Fedora agreed to this point. Leaping to the conclusion that football causes CTE and that if a young athlete plays the sport he will definitely develop the condition years later is going too far. There are clearly other factors involved, like genetics, drugs or alcohol, and underlying mental health.

Also read:
New research aims to advance our understanding of CTE and concussions

Fedora claims football is safer than ever

Fedora also pointed out that football is safer today than ever before. Clearly NFL and college football leaders are working to decrease the danger with rules changes, removing practice contact and more. Football is clearly safer today than in the early 1900s, when multiple players died. That crisis largely led to the formation of the NCAA – to protect the health and safety of the athletes.

Fedora has admitted to drinking a lot of Red Bull, so maybe the energy drink fueled his tirade about football being “under attack.” He claimed to have spoken to an American military general who supposedly credited the sport for the strength of our military. He argued that if we change football so that it becomes unrecognizable, “our country goes down too.”

He even claimed that what kids learn playing football “makes us such a great nation.” 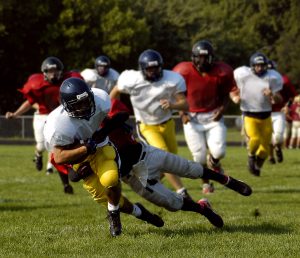 All sports can instill positive qualities in our kids

While I agree that football can teach important lessons, so can other sports. His comments are an insult to every kid that plays baseball, basketball, soccer or any other sport. Coaches in all sports can and do instill messages of teamwork, leadership and responsibility in their athletes. Even flag football can make athletes more disciplined and mature, without kids colliding into each other at high speeds hundreds of times each week.

Who is the real target of these comments?

The fact that Fedora felt the need to rant about football and CTE made me wonder who he is targeting with these comments. To me it felt like he was less angry with the scientists studying brain injuries than the media reporting on the studies.

In my experience, doctors and scientists aren’t out to bring down football. I have interviewed Drs. Ann McKee, Robert Stern and Robert Cantu of Boston University. Their studies have largely demonstrated what we know about long-term brain damage and repetitive blows to the head. They all insisted they aren’t attacking the sport but instead trying to learn what the risk is so that parents can make the best decisions they can.

From what I can tell, the media has fairly represented the research. In the articles reporting the Boston University study showing that brains of 110 of the 111 former NFL players had CTE, the journalists pointed out the selection bias. I’ve read that critics of the media’s portrayal of CTE argue that the danger is in the articles’ headlines. Apparently the headlines are much more sensational and suggest that football causes CTE.

I haven’t seen biased headlines, but then again, I actually read the articles discussing football and brain damage. You should too.

The need for an open, honest discussion

I’m glad Fedora made these comments. We need to have an open, honest discussion with coaches, parents, athletes and fans. We need the media to share the latest research, with doctors and scientists telling us what we can and cannot conclude from it and what we still need to know.

Note: A modified version of this article appears as my sports medicine column in the August 2, 2018 issue of The Post and Courier.