A Lisfranc injury of the foot is uncommon in sports, but it can be debilitating. These are injuries in which a ligament in the midfoot is injured. When the Lisfranc ligament is ruptured, the first and second metatarsals (the long bones of the midfoot) or other bones in the midfoot can separate. Lisfranc injuries are usually seen in high-velocity trauma, such as motor vehicle accidents. In sports, these are usually less serious injuries, usually occurring with twisting motions to the foot or landing on the foot with the ankle plantarflexed.

Tests to diagnose a Lisfranc injury

Making the diagnosis of a Lisfranc injury often requires a high degree of suspicion. Physicians examining athletes who have suffered injuries to the foot as described above will often notice pain at the midfoot rather than on the medial or lateral sides of the ankle, where the tenderness with a traditional ankle sprain is experienced. There are also some provocative physical examination tests that can recreate the athlete’s pain. This is typically a diagnosis that requires radiographic studies. The physician will usually start with x-rays, especially weightbearing x-rays, of the foot. X-rays alone will usually make the diagnosis. The bones of the midfoot will often be noticeably separated. Occasionally the physician will order an MRI, which will show not only the separation of the bones, but it will also show the integrity of the ligaments between the bones.

Treatment options for a Lisfranc injury

Treatment of this injury depends on its severity. A sprain or even partial tear of the Lisfranc ligament with little or no separation of the bones of the midfoot usually can be treated nonoperatively. It is still a bad injury in the sense that treatment for even these mild injuries often requires the athlete to be in a boot or cast for up to 6 weeks. Often the physician will even keep the athlete nonweightbearing to prevent worsening of the injury. If there is significant displacement of the bones, surgery is almost always indicated. Surgery usually requires an incision to open up the midfoot and align the bones appropriately. The surgeon will hold the bones together with one or two screws. After surgery, the athlete will be in a splint or boot and kept nonweightbearing for up to six weeks. Weightbearing will be slowly initiated over the next few weeks, but it will be two or three months before he is jogging. Return to sports can take many months, and often the athlete will be held out for the remainder of the season. 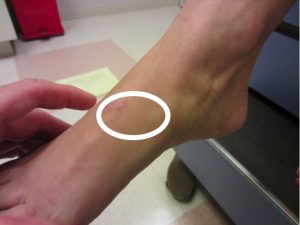