Lou Holtz was a tremendous success as head coach at Notre Dame. The Fighting Irish won a national championship during his time there. His teams often had some of the nation’s top recruits, and they played with discipline and intensity.

One year, Notre Dame entered the season as a favorite to win the title. A loss to a tough Stanford team effectively ended their chance to win the championship. As that crown had been the team’s goal all year, many wondered if Holtz and his staff would let up in practice the rest of the season. After all, they could no longer achieve their goal. 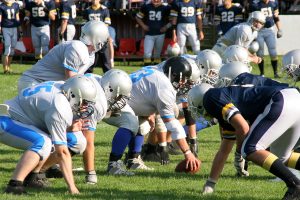 Holtz announces the team will work harder than ever

On Monday, following the Stanford loss, Lou Holtz informed his players that he would not relax his standards. In fact, the coaches would work the players even harder than ever.

A backup guard struggles in practice

Aaron Taylor, an All-American and the team’s starting left guard, missed practice with an injury. The backup left guard took his place as the team practiced play after play. The replacement just wasn’t up to the task. It wasn’t just the drop in talent that bothered Holtz. The player just wasn’t trying hard.

The coach finally had enough. He called out the player in front of the entire team. Holtz asked him why he wasn’t working hard and why he was choosing to let down the team. He wanted the backup guard to explain his lack of effort. When the player had no answer, Holtz sent him to the bench to think about it.

The third-string left guard instinctively ran onto the field and joined the offensive line, but Holtz sent him away. The offense would now play without a left guard.

Lou Holtz has his team practice without a left guard

The offense immediately knew it had a problem. On the first snap, a defensive lineman burst through the gap where the left guard would normally be and crushed the running back. The defender hit him so hard that the running back could barely see.

Holtz had them run the play again. Despite some grumbling, the players ran the same play. Same result. No left guard. The running back got pummeled.

The team had been practicing without a left guard all day

After he had the team run the play a third time with no left guard, the offense revolted. They wanted to know what was wrong with the coach. Holtz asked why they thought something was wrong. They shouted that they had no left guard.

Not backing down, Holtz insisted that the players were mistaken. In fact, they had been playing all practice without a left guard.

In Coach Holtz’s eyes, the backup guard who wasn’t putting in the effort was just pretending. Yes, he had the helmet, pads and uniform, but he wasn’t going all out on every play, as Holtz demanded of the Fighting Irish players. Essentially, he was abandoning his duties, and in doing so, he was letting down the team.

Right away, every player understood the message Lou Holtz was sending.

How often do you coast and avoid putting forth your best effort?

You must bring your skills and effort every day

If a team is going to be successful and reach the top, whether it’s on the football field or in the corporate world, every member of that team must work as hard as possible. Employees, like football players, have different roles and skills. If you don’t perform to your required level, there might not be someone who can quickly fill that void. 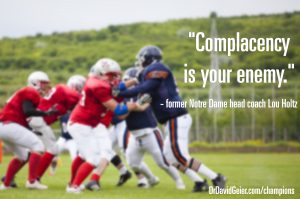 Complacency is your enemy

Plus, complacency can spread. If you feel too comfortable and allow yourself to put in a half-hearted effort, your colleagues might see it and stop trying hard themselves. Before you know it, everyone has a poor attitude, and the company stagnates.

Work with energy and enthusiasm

Regardless of your role on the team or in the company, you must do your best every single day. You must bring your unique skills to your work and deliver with energy and enthusiasm. That is what you are paid to do.

If you’re the leader, whether it’s the coach of the team or CEO of the company, you must show why everyone needs to give their best. You must clearly articulate the goals of the organization and make sure everyone is clearly focused on achieving those objectives. Plus, the vision of the goals can help motivate everyone to work a little bit harder to help accomplish them.

Every time you feel like your effort is just “good enough,” stop and think of that Notre Dame backup left guard. Then correct course immediately. Demonstrate a positive attitude. Work as hard as possible. Don’t let your teammates down. If everyone on the team or in the company keeps that mindset, you will achieve whatever goals you set.

Source: Winning Every Day: The Game Plan for Success by Lou Holtz

What you can learn from Lou Holtz about kindness