What we can learn from Lou Holtz about principles

Lou Holtz has been successful in everything he’s done, including winning a national championship as head football coach of the Notre Dame Fighting Irish. He has also been a very popular football commentator on television. One of the reasons he has been so successful is that he sticks to his principles.

A dilemma for Lou Holtz and his #1 ranked football team

One year during his tenure as the Fighting Irish head coach, Holtz took his team to Los Angeles as the number one ranked team in the country. Notre Dame would soon take on #2 USC. It was his team’s biggest game all season, and it could set up the team for a championship.

In the weeks leading up to the battle, Holtz had issues with two of his players. They were late for everything, including practices, meals and meetings. He tried everything he knew to do to get them to show up on time – discipline, yelling, and more. Finally, he had enough. He told his players that if they were late for anything and for any reason, even if it wasn’t the players’ fault, they would sit out the next game.

That threat of missing a game worked for a little while. The players arrived on time like the rest of the players on the team. The night before the game, in Los Angeles, these players showed up for the pre-game meeting 40 minutes late. Holtz stuck to his guns and suspended the players for the USC game. 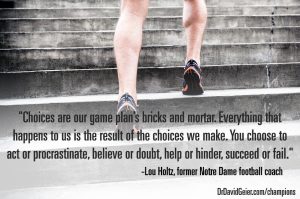 Sending the players home was a tough decision

The problem was that the two players were arguably the best athletes on the team. One was the team’s top running back, and the other was the best wide receiver. Lou Holtz knew he needed the players and that he could lose the game without them. But he decided to stick to his principles and send them home. In fact, as the plane left before the game with his star players on it, his only regret was that he didn’t make them walk home!

Holtz could have given in, rationalizing that he needed the skills those players brought to the team, even if they had disobeyed team rules. But then he knew he would lose the support of his players, who all knew the rules and followed them every day.

It turns out that not having those two players didn’t hurt Notre Dame that day. Without them, the Fighting Irish won the game anyway. Holtz later thought the win was a reward for doing the right thing.

Do you always stick to your principles and do the right thing?

Do you always stick to your principles and do the right thing, even if it might cost you a win, a big contract at work, or a top grade in school? In the video above, I discuss some scenarios where you could apply this Lou Holtz lesson and become a Champion in Sports, Business and Life.

Source: Winning Every Day: The Game Plan for Success by Lou Holtz

What you can learn from Lou Holtz about kindness

What you can learn from Nick Saban about motivation