What you can learn from Michael Jordan about motivation

Michael Jordan wasn’t just born to be the best basketball player of all time. Yes, he did have phenomenal athletic ability. Speed, power and jumping ability don’t necessarily make a basketball star, though, let alone a six-time world champion.

Michael Jordan had an unmatchable work ethic. Teammates often said he was the first player to arrive at the practice facility each day. He was the last one to leave.

Where did this work ethic come from? Was he born with it? Maybe. He might just be wired differently than the rest of us. But I would argue that Michael used something to get himself going – something we can all use – motivation.

After his playing days were over, Jordan played golf with his old friend and teammate at the University of North Carolina Buzz Peterson. Peterson and Jordan arrived at Chapel Hill in the same freshman class, although Buzz was actually the more heralded recruit.

During this round of golf, Jordan looked at Peterson and said, “I want to thank you for something.” After Peterson asked what it was Jordan was thankful for, Michael proceeded to explain how Buzz helped make him the legendary player he became. 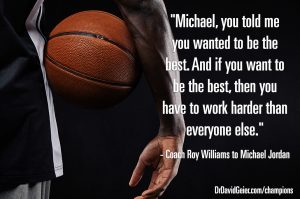 Everyone told Jordan he would never play because of Peterson

Out of high school, Peterson was the golden boy of North Carolina hoops. Everyone told Michael that Buzz would start and Michael would ride the bench. His family and friends told him he would never play because he was behind Buzz Peterson.

Jordan didn’t allow himself to get frustrated by these comments or start doubting his abilities. Instead, those words fueled his fire.

What could you use as motivation?

What could you use as motivation? Think about it for a few minutes. What would light your fire, as the comments that Jordan would always be behind Buzz Peterson fueled Michael?

If you work in sales, you could remind yourself of the top salesman in your company each day. If a competitor receives an award, you could post the newspaper article about it in your office.

On the other hand, maybe it’s not competition like these examples or Michael’s. Maybe a reminder of why you do what you do would work. Putting photos of your kids on your desk could get you going. You make a few extra calls each day because you want to provide a better life for them. Or maybe it’s a fancy car or extravagant vacation you desire.

Whatever you use as motivation, it has to mean something special to you.

Set a goal for your career. Then find and use a person, event or cause to motivate you every single day.

Source: Playing for Keeps: Michael Jordan and the World He Made by David Halberstam

What you can learn from Michael Jordan about improvement

What we can learn from Michael Jordan about preparation

What you can learn from Nick Saban about distractions and responsibility