MRSA skin infections in sports: Tips to prevent athletes from developing and spreading them

Shortly before I started my sports medicine fellowship with the doctors who took care of the St. Louis Rams, the team had several players develop MRSA infections. The CDC even came to St. Louis to swab the players, the turf of the field and other areas to find a cause. I wrote about skin infections, and MRSA in particular, for my latest newspaper column.

Methicillin-resistant Staphylococcus aureus (MRSA) infections are proving to be a more dangerous opponent than any an athlete faces on the field or court. Schools and teams are spending big money to fight them. You can take steps to protect yourself too. 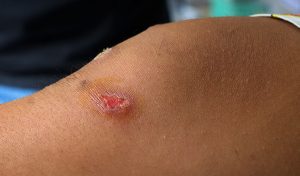 MRSA infections in the NFL

In the last few years, several NFL players have contracted these dangerous antibiotic-resistant staph infections. Three members of the Tampa Bay Buccaneers suffered infections during the 2013 season. Two of these three players never returned to the field.

New York Giants tight end Daniel Fells developed MRSA in his leg in 2015. He underwent at least 10 surgeries. Reports at the time suggested he was close to losing his foot. He retired a year later. Numerous other teams have had players develop MRSA infections in the last decade. In fact, an NFL physicians survey revealed that 33 players had these infections between 2006 and 2008.

MRSA can affect athletes in every sport

It’s not just football players at risk. Los Angeles Dodgers’ third baseman Justin Turner and Philadelphia Phillies shortstop Freddy Galvis suffered these infections. They have been reported among athletes from the pros to high school in sports such as soccer, basketball, wrestling and martial arts.

Also read:
Tips to prevent the spread of skin infections in sports

Carriers of MRSA: Athletes compared to the general population

This bacteria exists throughout our daily environment. A small percentage of people carry it on their skin or in their nose without contracting an infection.

Athletes are much more likely than the general population to carry MRSA. They often use shared equipment, like training tables and water bottles. They can also develop small abrasions or skin wounds that can become infected if they are not covered.

MRSA spreads among athletes easily with direct skin-to-skin contact. A study of athletes at Vanderbilt University found that athletes who played contact sports were more than twice as likely to have MRSA on their skin compared to athletes of noncontact sports. According to a Duke study, pro football players are 7 to 10 times more likely to carry MRSA than the general public.

MRSA skin infections and the challenge of treating them

MRSA infections usually present with a small, red, swollen and painful bump on the skin that is filled with pus. If treated early with the proper antibiotics and draining the infection, the patient can recover quickly.

MRSA can spread rapidly into muscle, bone and blood if not treated. These infections can become limb- and life-threatening, requiring multiple surgeries and occasionally amputations.

Many professional teams, colleges and high schools are going all out to prevent MRSA infections among their athletes. Machines costing tens of thousands of dollars use ozone gas instead of detergent to sterilize uniforms and equipment. A system that sprays silver and hydrogen peroxide on every surface in the locker rooms and training rooms has become popular as well.

Tips for athletes to avoid developing an MRSA infection

Parents at every level can talk to the coaches and athletic trainers about what precautions they are taking to prevent infections. The athletes play an important role in limiting the spread of this bacteria too.

Athletes should wash their hands or use hand sanitizer after practices and games and after using shared equipment, like weights.

Despite the reluctance many athletes have to showering in public, taking a shower after games and practices is crucial. It can significantly decrease the chance that MRSA exposure while playing can turn into an infection.

Also listen:
Episode 119 of The Dr. David Geier Show: How can athletes prevent and treat skin infections in team sports?

After the shower, an athlete should use his or her own towel. A study found that MRSA infections were eight times more likely among high school football players who shared a towel.

Wash your uniform and clothing thoroughly

If the school or team doesn’t do it, wash the uniform and clothing thoroughly after every practice and game.

Show suspicious lesions to the athletic trainer or team doctor

Cover any skin cuts or abrasions with clean, dry bandages. If you think you have an infection or wonder if a wound could be at risk for infection, show it to your athletic trainer or team doctor. Pay particular attention to any areas of redness, warmth, pain or pus.

It may be impossible to completely defeat MRSA. If we exercise caution, we can prevent its spread and decrease the risk of severe infections that jeopardize athletes’ playing careers and lives.

Note: A modified version of this article appears as my sports medicine column in January 5, 2018 issue of The Post and Courier.

Why sports can be a breeding ground for dangerous MRSA infections. By Johnette Howard. ESPN.com. October 16, 2015.