It has been a brutal year for NFL injuries. Injuries have taken star after star. At this rate, the team who ultimately wins the Super Bowl might not be the best, but the healthiest. I discussed the terrible year for injuries in the NFL in my latest newspaper column.

Despite the media focus on national anthem protests and suspensions for player conduct, the 2017 NFL season could ultimately be remembered for a much bigger problem – injuries.

According to The Wall Street Journal, NFL teams placed a total of 420 players on injured reserve through Week 14. As high as that number sounds, it’s lower than in the previous two seasons.

The problem for the NFL – and for its fans – is not how many players have been hurt. It’s who those injured players are. 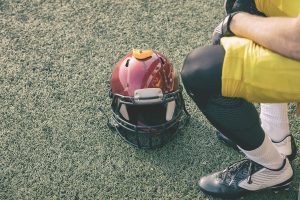 Notable NFL injuries during this 2017 season

The number one overall pick in the 2012 NFL Draft missed the entire season after a slow recovery from off-season shoulder surgery. There is still no answer to when he will be back – or if he will return.

Possibly the best running back and number one overall pick in a majority of fantasy football leagues, the Cardinals star underwent surgery for a wrist dislocation in Week 1 and still hasn’t stepped on the field.

The best wide receiver in football broke his ankle in Week 5. Worse, the Giants lost three receivers to season-ending injuries in that game alone.

The Houston Texans’ defensive end, and arguably the best defensive player in the game, suffered a tibial plateau fracture in a prime-time, nationally-televised game. He underwent surgery and missed the remainder of the season.

Possibly the best quarterback in the game today, the Packers’ star suffered a broken collarbone and missed 7 games. The Packers instantly became a mediocre team without him.

The early leader for Rookie of the Year turned around the Texans until he suffered his second career ACL injury.

The second-year quarterback guided the Eagles to the best record in football. He was the favorite for MVP until a Week 14 torn ACL ended his season and maybe the hopes of long-suffering Philadelphia fans.

In Week 8, the Chicago Bears tight end suffered a knee dislocation and torn artery. Finally starting his rehab after undergoing eight surgeries on his injured leg, Miller told reporters recently that amputation of his leg had been a “very real” possibility.

Attempting a tackle, the Steelers’ linebacker rammed his helmet into the hip of an opponent. He reportedly could not move his legs as an ambulance took him off the field. Doctors performed spinal stabilization surgery days later. Updates on his status have been limited, but the Washington Post reported that a number of Steelers players just hope Shazier can one day walk again.

Concussions and the NFL concussion protocol

That list doesn’t include all the players who have entered the NFL concussion protocol. Critics have blasted that protocol repeatedly this season. Most recently, Texans quarterback Tom Savage returned to play after an injury in which his head slammed to the turf. Video of the player lying on the field showed what appeared to be his hands shaking uncontrollably, a sign of severe head trauma.

Also read:
Head injuries in football: How and when concussions occur in the NFL

It’s hard to know if 2017 represents an NFL injuries aberration, or if this is a real trend toward more and more injuries. Regardless, the appearance isn’t good. These high-profile injuries might further harm the league’s image among fans and concerned parents.

The sports writer who pleaded to 2017 on Twitter did get some good news. Antonio Brown suffered a partially torn calf muscle. While his regular season is over, he might return in time for the playoffs in early 2018.

Note: A modified version of this article appears as my sports medicine column in the December 22, 2017 issue of The Post and Courier.

After 8 surgeries, Zach Miller emotional and thankful in his return to Halas Hall. By Dan Wiederer. Chicago Tribune. December 11, 2017.