The new roughing the passer rule aims to protect quarterbacks, but at what cost?

I’ve done several media interviews in the last few weeks about football injuries. Inevitably the host asked me a question about the new roughing the passer rule. “Does landing with your body weight increase the risk of injury to the quarterback?” “Does this rule make football safer?” I’ve watched a lot of football so far this season, and I am probably just as confused by this rule as most NFL fans. I discussed it in my latest newspaper column.

Coming into this NFL season, I thought the potential rule controversy would be the new helmet rule. Players would now be penalized for lowering their heads during a tackle, even if their intent was not to use the helmet to hurt the opponent but to protect themselves. Many football commentators argued that a penalty for lowering the helmet could be called on every play, so it would radically alter the game.

Through five weeks of the NFL season, a different rule change, proposed supposedly to protect the health of certain players, has had a much greater impact and caused much more controversy. 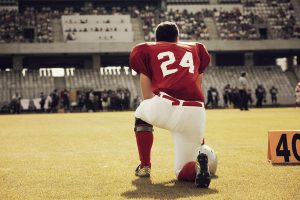 Changes to the roughing the passer rule

Roughing the passer has been a penalty in the NFL since 1995. Rule 12, Section 2, Article 9 previously stated: “When tackling a passer who is in a defenseless posture (e.g., during or just after throwing a pass), a defensive player must not unnecessarily or violently throw him down and on top of him with all or most of the defender’s weight.”

In the offseason, the NFL Competition Committee decided to stress the importance of this rule and push referees to call the penalty. The rule now uses “or” instead of “and.” Now officials can throw a flag if a defender throws down the quarterback violently OR lands on top of him with most or all of his body weight. Now there is more confusion than even existed with the murky catch rule of previous years.

The poster boy of this confusion is Green Bay Packers linebacker Clay Matthews, who was penalized three consecutive weeks for sacks where his momentum caused him to land on top of the quarterback. To most football fans, these appeared to be normal, non-malicious sacks. Instead, they were 15-yard penalties, and at least in one case, it probably cost the Packers a win.

Matthews has expressed his frustration weekly, stating he is just making football plays and not trying to hurt the quarterback. He also insists he doesn’t know how to follow the rule as it’s being called and still sack his opponent. Former NFL official Ed Hochuli told USA TODAY, though, that Matthews’ sacks are textbook definitions of landing on the quarterback and that defenders can avoid doing so.

Observers claim the NFL made the change after Minnesota Vikings defender Anthony Barr tackled Packers quarterback Aaron Rodgers, landing with all his weight on the passer. Rodgers suffered a broken collarbone that caused him to miss most of last season. Now even Rodgers says these penalties are “going in the wrong direction.”

Increases in penalties called this season

In addition to angering players and fans, the rule has actually caused an injury. Miami Dolphins defensive lineman William Hayes tore his ACL sacking Derek Carr. He admitted he was trying to avoid landing on the Oakland quarterback. Carr told reporters he wished Hayes had landed on him so the defender wouldn’t have suffered the season-ending knee injury.

In addition to Rodgers, Deshaun Watson, Joe Flacco and other quarterbacks in the league have questioned the rule and how it’s being enforced.

Was the change made for health or business reasons?

To me, this change seems more about protecting quarterbacks specifically than an overall emphasis on player health across the board, as the new helmet rule offers. Honestly, it seems the league would rather have confusion among defenders and lots of flags thrown than Deshaun Watson, Tom Brady and the other star quarterbacks on the sidelines all season with injuries.

Maybe the NFL wants a more offensive game. Maybe they value TV ratings and fan experiences more than flags that don’t make sense. But it seems clear the NFL is happy with the rule and intends to enforce it.

Now football fans will have to watch and see if defensive players will somehow adjust how they go after the quarterback or just accept that they will get penalized and play the way they always have.

Note: A modified version of this article appears as my sports medicine column in the October 10, 2018 issue of The Post and Courier.

QB protection penalties are way up, and the NFL has a problem. By Kevin Seifert. ESPN.com. September 17, 2018.