For years, I have argued that our youth sports system is out of control. I have harped on the dangers of early single-sport specialization and kids playing on travel teams at seven- and eight-years old. Mainly I have focused on the risks of injuries and burnout. One aspect that is worth mentioning is that our approach might not even be the best for creating top athletes, at least for the majority of kids who play sports as children. For my latest newspaper column, I discuss a potentially better system, Norway’s youth sports system, although it’s a model that probably stands no chance of ever being adopted in this country.

Why is Norway, a country with a population of only 5.3 million, better at Winter Olympic sports than we are? While it would be easy to claim that Norway’s snowy climate offers a huge advantage, the U.S. has plenty of top ski resorts for our athletes. Plus, we have state-of-the-art training facilities, a huge pool of potential athletes, and the enormous resources of the United States Olympic Committee.

The difference might lie in our youth sports system – and theirs.

Many journalists and sports experts have been looking into Norway’s performance in the 2018 Winter Olympics in Pyeongchang, South Korea to figure out how the Norwegian competitors performed so well. Its athletes won 39 medals, the most of any country in the history of the Winter Games.

The secret doesn’t seem to be the methods Norway uses to train its top athletes in the years before they compete on the world stage, but the ways they encourage sports participation for all young children.

As Tom Farrey points out in an article in this week’s New York Times, Norway’s youth sports system is almost a polar opposite to what we do with our kids here.

In 1987, the Norwegian Olympic and Paralympic Committee and Confederation of Sports created a statement called the Children’s Rights in Sports that governs how kids participate in athletics. All 54 national sport federations agree to abide by the rules or risk losing government funding.

Sports should be available and fun for all kids

The basic premise of the Children’s Rights in Sports centers on making sports available for all kids. The goal of sports is to have fun. Instead of the pressure for kids to specialize in one sport and play it year-round right away, like is common in the U.S., Norway wants kids to play sports because they enjoy it.

No scores, ranks or championships for young athletes

Once kids reach age 13, Norway’s sports federations make top coaches available to athletes skilled in those sports. But until age 13, it’s all about participation.

Kids often quit sports because they are no longer fun

A study performed by the National Alliance for Youth Sports found that 70% of American children quit sports by age 13. One of the main reasons kids give for dropping out is that sports are no longer fun.

With such a small pool of kids compared to countries like the U.S., Norway can’t afford to have its kids dropping out of sports because they don’t enjoy them.

Also read:
The Healthy Sport Index offers insight into the health benefits and concerns of many youth sports

The benefits of not keeping score in youth sports

By not keeping score in games, and by not ranking young athletes and teams, kids can play sports to have fun, spend time with their friends, and grow to love sports so that they stay active for life. And because there is little pressure to compete with each other, the young athletes can share tips on how to improve. 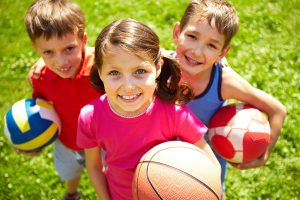 It might seem like a system based on fun and encouraging kids to stick with sports would come up short compared to our system of national championships for seven-year-old teams, parents hiring private coaches for nine-year-olds, and families traveling across the country every weekend for tournaments. But the Norwegian athletes get just as much physical activity as the Americans. Instead of playing the same sport day after day, month after month, and year after year, Norwegian children learn and develop a broader range of skills and physical abilities, potentially making them better, more well-rounded athletes as they get older.

Pressures from parents and coaches in the U.S.

It’s true that, unlike the U.S., college is free in Norway. Parents in the Scandinavian country don’t feel the pressure to pull their children out of one team and move them to a more successful team or hire expensive private coaches in hopes of a college scholarship.

Also read:
What could explain the drop in youth sports participation?

Whether the United States ever adopts a program like Norway’s youth sports system, parents can use these principles on their own. Let kids pick what sports they want to play. Encourage them to try a variety of sports and switch when they want to. Take pressure off the kids by focusing on developing skills and getting better instead of scores and ranks. Make sports fun again.

After all, the goal should be to develop the best college and professional athletes, not the best 10-year-old athletes.

Note: A modified version of this article appears as my sports medicine column in the May 6, 2019 issue of The Post and Courier.

References:
Does Norway Have the Answer to Excess in Youth Sports? By Tom Farrey. The New York Times. April 28, 2019.

How Norway Won the Winter Olympics. By Tom Farrey. The Aspen Institute. February 27, 2018.

Norway Crushed the Competition at the Winter Olympics. Here Is the Tiny Country’s Secret. By Sean Gregory. Time. February 23, 2018.

Norway is dominating these Winter Olympics with a unique approach to sports. By Dan Wolken. USA TODAY Sports. February 19, 2018.