Bullpen and warmup sessions should factor into pitch counts

I’m often asked by concerned parents of young baseball players what to do to keep their kids healthy. Despite the stories of parents who push their kids hard to pitch through pain and to pitch for more than one team in a season, many do want to do what they can to protect the arms of their children. One question I receive a lot deals with pitch counts and how to know how many pitches is too many. Namely, why don’t the bullpen sessions before games and the warmup pitches thrown between innings count toward those limits? I address that question, based on a recent study in the Orthopedic Journal of Sports Medicine, in my latest newspaper column.

As high school baseball approaches the playoffs, fans will undoubtedly hear of a pitcher somewhere throwing a ridiculous number of pitches in a game. We will hear outrage from some parents and doctors, complaining that the coach needs to consider the long-term health of the young athlete. We will hear other parents and coaches argue the opposite – that pitch counts are unnecessary and that kids need to be tougher. 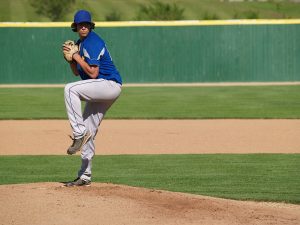 The switch from innings limits to pitch counts

As recently as 2012, only two states had pitch count restrictions at the high-school level, as most states used innings recommendations. During the 2016-2017 academic year, the National Federation of State High School Associations (NFHS) started requiring policies based on the number of pitches thrown during a game.

What counts as a pitch?

How many unaccounted for pitches do high school pitchers throw?

A recent study performed at the University of Florida looked at just how many pitches that are generally unaccounted for young pitchers actually throw. They examined baseball teams at 34 high schools of different sizes, classifications and rankings.

The researchers counted every pitch thrown by the starting pitcher off the mound from the rubber. The total number included pitches while in the bullpen prior to game play, while warming up on the field before each inning, and during the game.

When they analyzed the 115 starting pitcher outings, none of them exceeded the 105 live-game pitch limit, the uppermost number of pitches allowed for a high school pitcher by Major League Baseball’s PitchSmart taskforce.

When they factored in the bullpen and between-innings pitches, however, these young hurlers threw on average 42.4% more pitches than what was recorded during the game alone. Based on these total pitch counts, over 70% of the starters exceeded the 105-pitch limit. 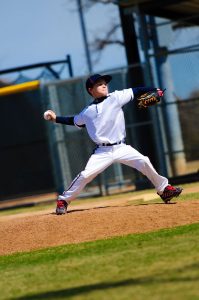 Why do these uncounted pitches matter?

This unaccounted workload matters because it could contribute to overuse injuries. Pitchers throw just as hard, or close to it, in the bullpen before games and warming up between innings. And these uncounted pitches can certainly lead to fatigue, and the poor mechanics and arm injuries that can result from that fatigue.

After all, overuse injuries in youth pitching don’t necessarily result from throwing too many pitches in any one game. They result from cumulative wear and tear over weeks, seasons, years, and careers.

Parents and coaches should consider bullpen and warmup pitches

We’ll see in the coming years what, if anything, comes from this data. It’s hard to imagine the NFHS will change which pitches will count toward the daily limits. Coaches simply won’t be able to keep track of how many pitches a kid throws in the bullpen or before innings with all they have to do during games.

This information might be something to consider, though, for parents and coaches interested in keeping their young throwers out of the orthopedic surgeon’s office.

Note: A modified version of this article appears as my sports medicine column in the April 13, 2018 issue of The Post and Courier.