I was asked on a recent radio show if I thought that these MLB pitchers now routinely throwing 100+ miles per hour was a worrisome trend. I instinctively answered yes, that I was concerned it would lead to more injuries and surgeries, like Tommy John surgery. I wanted to see if there was any data to prove my assumption that higher pitch speed could be dangerous. I wrote about the studies I found and what pitchers, coaches and parents should know for my latest newspaper column.

The fan appeal of pitch speed

With Major League Baseball games stretching longer and longer, and with what can feel like an eternity between pitches, it’s no wonder that the stat flashing the speed of the pitcher’s last pitch has become so popular. Whether it’s shown on the scoreboard in the stadium or on your TV at home, a pitch clocked at 100 mph will surely elicit some oohs and ahs.

It could also create an injury. 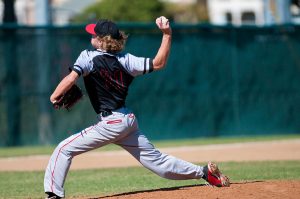 I’m concerned about batters hit by pitches, obviously. I’m more troubled, though, by what these rockets could be doing to the arms of the athletes throwing them. And it’s a trend that only seems to be getting worse.

A trend toward faster pitch speed in baseball

In 2003, only one MLB pitcher threw at least 25 pitches reaching 100 mph or more that season. Only a decade later, eight pitchers hit that mark.

The increasing use of relievers might influence pitch speed

The shift in how pitchers are used in the majors has partly contributed to this trend. In the past, a kid with a good arm was trained to become a starting pitcher. As major league clubs increasingly pull their starters out of games early, they go to their bullpens more often. And teams need guys who can bring the heat.

Pitchers who throw faster pitches are more likely to get injured

Of all the MLB pitchers who threw 95 mph or harder on average in 2017, 80 percent of them appeared on the disabled list at some point during the season. Only 29.6 percent of pitchers who averaged between 93 mph and 95 mph landed on the DL.

Let’s look over a longer period of time. Jeff Zimmerman correlated the relationship between fastball velocity and injury among MLB pitchers from 2002 to 2014. Pitchers who threw 96 mph or more had over a 27% chance of appearing on the DL the following season. That risk was almost double that of the pitchers who threw 90 to 93 mph. Plus these hard-throwing pitchers were on the DL for longer amounts of time.

Research studies have shown a risk between increased pitch velocity and injury, especially a UCL injury that leads to Tommy John surgery.

A 2010 study in the American Journal of Sports Medicine followed 23 professional pitchers for three seasons. The 14 pitchers who remained injury free had a mean pitch velocity of 85.22 mph. The nine pitchers who were injured averaged 89.22. The three pitchers with the highest maximum velocity all needed Tommy John surgery.

Similarly, a 2016 study in same journal looked at the velocity of every pitch thrown in MLB between 2007 and 2015. Not only was the peak pitch velocity a predictor for a pitcher who would one day need Tommy John surgery, it was the most predictive risk factor.

The message for young baseball pitchers and their parents and coaches

More and more young pitchers want to throw harder than ever to get their pitch speeds up. Legendary pitcher Tommy John himself told me that what matters for kids in terms of development isn’t speed but being able to command and locate the pitches.

That message isn’t reaching the young throwers and their coaches and parents. Just look at the growing use of weighted baseballs by pitching coaches to increase a kid’s pitch speed.

Honestly, major league teams and pitchers can do what they want. Even if the increased speed did lead to higher rates of getting batters out, to me it’s not worth it. Surgery and 12 months on the DL seem too high a price to pay.

For our kids, though, trying to throw as hard as possible just to increase your pitch speed, even if it impresses the coaches and scouts, just isn’t worth the gamble.

Note: A modified version of this article appears as my sports medicine column in the September 13, 2018 issue of The Post and Courier.

Cardinals rookie Jordan Hicks appears to have taken the title of Fastest Pitcher in Baseball. By Jake Mintz. MLB.com. April 6, 2018.

Pitch Velocity and Injury: Is Throwing Less Hard Worth It? By John Edwards. Fangraphs.com. January 21, 2018.