I was asked on a radio interview recently who is to blame for the explosion in youth sports specialization – the overwhelming proportion of kids who play only one sport starting at a very early age instead of playing multiple sports.

It’s easy to blame parents, who think that by pushing their kids to play just football or just soccer, their son or daughter will be more likely to earn a college scholarship. You could blame the club and travel coaches, who need to win and need the best young athletes to help them win. You could even blame the organizers of these huge tournaments, who make six-figure salaries just by holding events for these club and travel teams.

In my latest newspaper column, though, I look at the beliefs held by the young athletes themselves about sport specialization and encourage them to give playing mulitple sports a chance.

Almost one year ago to the day, I presented my HEALTHY Game Plan to cut youth sports injuries at a TEDx event. Part of that plan encouraged parents to allow their children to play multiple sports growing up, as I have previously discussed in this column.

Play more than one sport growing up

I’ve always made my pitch to parents and coaches. This time, I want to appeal directly to the young athletes. Play more than one sport at seven or eight years old. Even play three or four if you’re having fun. When you’re older, you can specialize.

Don’t believe the coaches and parents who tell you that if you don’t pick one sport and play it all year, you won’t have success at the college or pro level. It isn’t true. 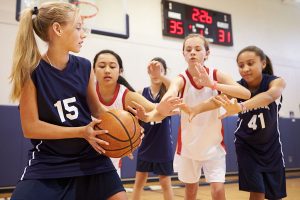 Multi-sport athletes dominated the first round of the NFL Draft

The best among them played multiple sports, too. Overall number one pick, former Oklahoma quarterback Baker Mayfield, was a high school baseball star. Running back Saquon Barkley, picked second by the New York Giants, competed in basketball and track and field. The Jets used the third pick on former USC quarterback Sam Darnold, a former basketball and baseball player.

Only three players selected in the first round played football alone. Even that number is misleading. Josh Rosen, one of those three who played only high school football, was nationally ranked in tennis before choosing to focus on the gridiron.

This dominance of multi-sport athletes in the NFL Draft isn’t a one-year phenomenon, either. Those numbers are almost identical to the 2017 draft.

Also read:
The risks – and lack of benefit – of early sport specialization

I’m appealing to you kids directly because you don’t seem to believe that playing different sports is good for you.

Researchers at the University of Wisconsin surveyed 974 young male and female athletes. The kids completed anonymous questionnaires that studied their beliefs and attitudes about sports participation and specialization.

Like I would expect with questionnaires of parents and youth sports coaches, this survey shows that kids largely see specializing in one sport at an early age as positive:

The 2018 NFL Draft is just one of many examples showing that you can play a variety of sports and reach the pros at the highest level.

As far as injuries from specializing in one sport at an early age, multiple studies have shown a higher risk of overuse injuries among these kids. Now an NBA study has shown that NBA players who played multiple sports in school suffered fewer major injuries as a pro and had longer careers than the players who only played basketball growing up.

Hopefully I’ve shown you that by playing two or three sports early and then specializing later, if you choose to, is better for your health and your long-term athletic success.

In addition to fewer injuries, kids who play more than one sport have lower rates of burnout and are less likely to quit sports altogether. Plus, by playing a variety of sports, you can improve your balance, hand-eye coordination, power, agility, communication and leadership more than you might while doing the same thing, day after day, season after season, for your entire youth career.

Go ahead. Pick a different sport and try it for a while. You’ll be glad you did.

Note: A modified version of this article appears as my sports medicine column in the May 15, 2018 issue of The Post and Courier.

Do most high school athletes specialize in one sport?