The attention of the world on soccer this month, it’s a good time to discuss the changes to heading in soccer, especially at the youth level. Will banning or limiting heading in soccer help prevent concussions? Will it decrease the risk for long-term brain damage, like CTE? And will it negatively affect the development of young soccer players in this country?

The chances of suffering a concussion specifically from heading the ball are controversial. Some studies equate the impact delivered from a header to a boxer’s punch, while others suggest that the forces might not be enough to cause an outright concussion. Still, many concussions occur in the act of heading the ball. Getting hit in the head from an elbow from an opponent trying to head the same ball, landing awkwardly and hitting your head, or even colliding with the goal post can all occur. Decreasing heading in the sport will cut down on those events somewhat. 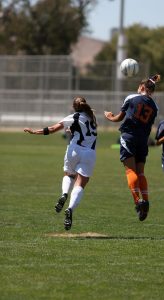 In football, we worry about repetitive subconcussive blows, such as when the offensive and defensive linemen collide at the beginning of the play. These blows are not severe enough to cause a concussion, but these micro concussions can build up over time. These are the blows that are thought to be associated with chronic traumatic encephalopathy, or CTE. Heading the ball over and over could lead to similar issues, especially in kids whose brains are not done developing.

In this video, I also share my thoughts on how it would affect the competitiveness of our young soccer players compared to other parts of the world where the kids do head the ball.

Also read:
Tips to lower the risk of a concussion
How much time should your child practice and play in games?