For many reasons, football gets most of the attention about concussions. To be fair, it is the sport with the most concussions – by a wide margin. But that fact doesn’t mean that athletes in other sports can ignore the risks. Removing athletes from play after a concussion is important in all sports.

Over a week later, reports surfaced that Karius was evaluated by a specialist in Boston and was felt to have suffered a concussion from Ramos’ elbow. 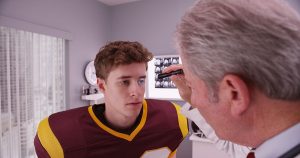 Criticism immediately swirled around Karius and Liverpool for making excuses for the goalkeeper’s mistakes. How much the head injury affected his judgment or vision is impossible to know. It is definitely possible that the injury did play some role in his performance the rest of the match.

What’s worse about the scandal, though, it that little attention has gone to why no one made the diagnosis at the time. Karius was not evaluated by athletic trainers or doctors on the field. Presumably, he didn’t tell teammates or his coach about it either. To me, this is a failure all around.

Athletes in any sport need to understand the seriousness of concussions. Regardless of how important the game is, you must tell your coach, the athletic trainer, the doctor or your parent if you suffered a head injury, even if you don’t know if it’s a concussion. Get it checked out right away rather than trying to play through it. Removing athletes from play after a concussion is important in all sports and for all athletes.