Repeat concussions and immediate removal from play after a concussion

For the last few years – essentially since I did months of research on the sport for my book That’s Gotta Hurt: The Injuries That Changed Sports Forever – I have come to the conclusion that there is really no way to completely eliminate concussions or subconcussive blows in football. That belief doesn’t change my attitude that we must do what we can to decrease the risk. For that reason, I have been supportive of the NFL and NCAA’s efforts recently. I discuss why these rule changes to try to decrease concussions are so important, based on some new research studies about repeat concussions and immediate removal from play, in my latest newspaper column.

The NFL and NCAA have adopted a number of rule changes this offseason – fair catches on kickoffs inside the 25-yard line and penalizing players for lowering the head when tackling – to try to decrease concussions in football. Several recent scientific studies highlight why these changes are so important. 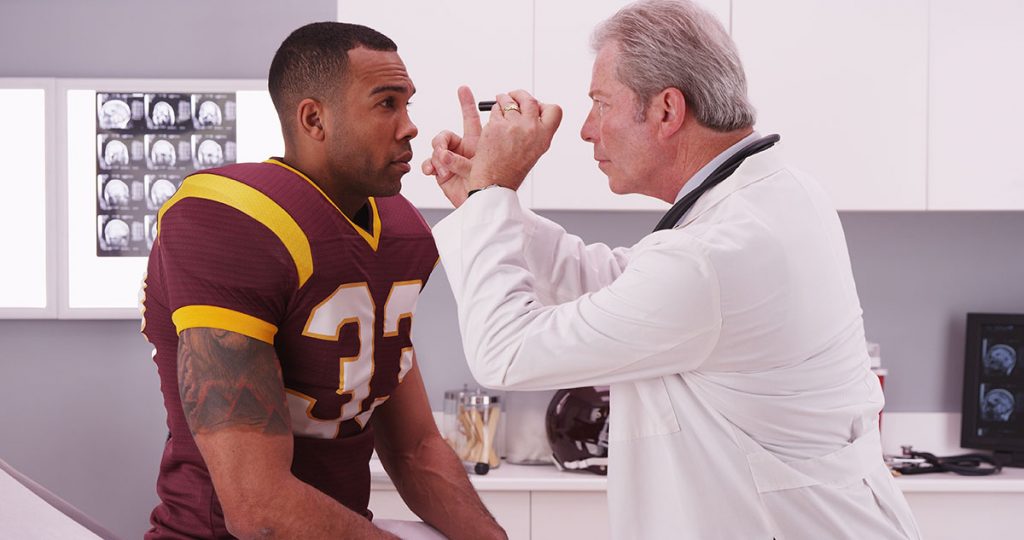 In a study using mice, the NIH researchers found that a second brain injury within a 24-hour period prevented the normal regeneration of these damaged blood vessels. This interruption of the brain’s repair process might explain athletes’ post-concussion syndrome. These athletes can experience headaches, dizziness, sensitivity to light and nausea for months.

Repeat concussions often occur within 10 days of the initial trauma

These repeated concussions can take a tremendous toll, not just at the time of trauma, but years later.

The long-term effects on health of multiple concussions

Zachary Y. Kerr, Ph. D, MPH and other researchers studied 204 football players who played college football between 1999 and 2001 but never went on to play at the professional level. Athletes with a history of three or more concussions had worse overall health scores and worse indicators of mental health almost two decades later. In addition to the poorer health scores, which were on average worse than the U.S. population, these multiply concussed athletes were more likely to have moderate or severe depression and alcohol dependence.

Also read:
New research aims to advance our understanding of CTE and concussions

What about return to play after a concussion?

You just want him or her to play. “The playoffs are starting. He needs to play,” you might argue. “The team can’t win without my daughter,” you might believe.

For you win-at-all-cost parents, here’s your reason to hold out your kids after a concussion. They will return to play faster.

If the answer to both questions was yes, then the concussed athlete was labeled immediate removal of play. Sadly, about two-thirds of the athletes fell into the delayed removal from play category.

The athletes who reported their injuries and who were immediately removed from play missed less time from their sport (about three days less) and had a shorter duration of symptoms than the delayed removal athletes. The immediate removal athletes also had a lower risk of having recoveries that took 14 or 21 days or more.

These studies unquestionably show why the steps taken by the NCAA and NFL are necessary. We must absolutely take efforts to decrease the incidence of concussions athletes suffer. It also shows, though, that parents and coaches need to understand that athletes must be removed from play immediately after a concussion – no matter what.

Note: A modified version of this article appears as my sports medicine column in the April 26, 2018 issue of The Post and Courier.