I’ve admired Tiger Woods for years. Looking past some of the off-the-course issues, I think he is one of the most amazing competitors I have ever seen in any sport. His win at the Tour Championship marks an amazing comeback from spinal fusion surgery. I discussed his surgery and how remarkable his comeback to professional golf is for my latest newspaper column.

I’ve watched a number of amazing performances from Tiger Woods over the years. There was his first green jacket, winning the 1997 Masters at age 21. In 2000, he won the U.S. Open at Pebble Beach by an astounding 15 shots. And he won the 2008 U.S. Open on basically one leg, playing with what turned out to be a torn ACL.

In my mind, Sunday’s performance might have exceeded all of them.

In case you missed it, Woods secured his first PGA Tour victory since 2013 by winning the Tour Championship at the East Lake Golf Club in Atlanta. After encouraging but inconsistent showings at The Open Championship and PGA Championship, Tiger finally put his entire game together, leading wire-to-wire to beat Billy Horschel by two shots. 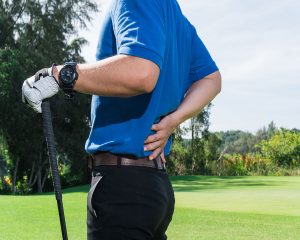 The season-ending victory came just 17 months after undergoing his fourth back surgery. Woods had been dealing with lower back pain and sciatica (pain shooting down his leg) from herniated discs. Prior attempts at treatment, including medications, therapy, injections and three surgeries to remove the herniated discs, failed to relieve pressure on the nerves in his back and the pain that kept him struggling on the course.

On April 19, 2017, Woods underwent a surgery that his agent, Mark Steinberg, described as “dramatically different.” Dr. Richard Guyer performed a minimally-invasive Anterior Lumbar Interbody Fusion at the Texas Back Institute. The procedure fused his L5 and S1 vertebrae, the lowest of the bones of his lumbar spine and top of his sacrum. Dr. Guyer removed the damaged disc material between L5 and S1, restored the space between those bones, and placed bone graft to eliminate motion and pressure on the nerves.

Tiger improved quickly. “It is hard to express how much better I feel,” Woods wrote in a post on his blog. “It was instant nerve relief. I haven’t felt this good in years.”

Woods said that before the fusion he could barely do physical activities without pain. Playing with his kids was hard, let alone playing professional golf. Tiger, though, aimed not just for a better quality of life but also to return to the Tour. Dr. Guyer said in a statement on Tiger’s site that his rehab would be geared to allow him to try to return to competitive golf.

One advantage of the procedure Dr. Guyer performed was that by fusing the bones from the front, he did not have to go through the large back muscles along the spine that golfers rely on for their powerful swings. 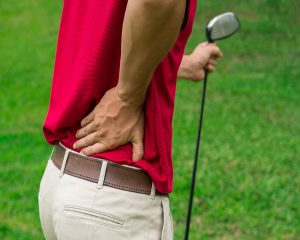 Playing on the PGA Tour after spinal fusion

Low back problems are common among older golfers, especially recreational players. This surgery has shown good success in terms of return to golf for athletes at that level. According to orthopedic surgeon Dr. Joshua Dines, only one other PGA player – Dudley Hart – has had a spinal fusion at the same level Tiger did.

Tiger did return to the course, playing his first tournament round 10 months after surgery, at the Hero World Challenge in the Bahamas.

Step back for a second, though, and forget Tiger’s back injuries. Woods is 42 years old, an age thought to be well past your prime on the PGA Tour, even if you’re healthy. Sure, Jack Nicklaus won the 1986 Masters at age 46, but that triumph is by far the exception rather than the rule.

The future looks bright for Tiger Woods and golf

We don’t know how long his back will hold up or if his older age (for a pro on the PGA Tour) will start to take its toll. What I expected, and what many so-called experts predicted, was that we had seen the last of Tiger Woods as a champion. Maybe he would make appearances at the majors or captain a Ryder Cup team, but he would never look like the Tiger that draws millions of fans to watch golf on Sunday afternoons.

With 2019 bringing Tiger a chance to win a fifth Masters title, with the PGA Championship at Bethpage Black, where he won in 2002, and with the U.S. Open at Pebble Beach, the site of his 15-stroke victory in 2000, the future looks bright for Woods and the sport.

Now it no longer seems impossible that Tiger breaks Sam Snead’s record 82 PGA Tour victories. If Woods plays like he did last weekend, it’s possible he makes a run at Nicklaus’s 18 major championships. His comeback is truly remarkable.

Note: A modified version of this article appears as my sports medicine column in the September 26, 2018 issue of The Post and Courier.

Can spectators protect themselves from extreme heat and humidity?