Tips to stick to your New Year’s resolution

Here are some easy steps to stick with, and achieve, your New Year’s resolution.

As great as losing 100 pounds or running a marathon would be, for many people, it simply isn’t achievable quickly. If you’re obese, aim to lose 20 pounds. When you lose 20, then go for more. If you want to run but you are new to it, shoot for a 10-K instead of a marathon.

Set incremental goals and reward yourself for these small wins. If you’re trying to start running, reward yourself at each significant step, such as getting a massage for increasing from 10 to 15 miles a week. Set new rewards for each incremental success.

Post your list in a visible place, like a bathroom mirror or the dashboard of your car. Use it as a reminder to yourself of what you are trying to achieve. 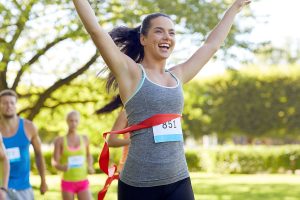 Use the support and encouragement of a friend or family member. Check in at least weekly, or even daily, to announce your progress. Encourage each other, and push each other when you are falling behind.

New Year’s resolution tip: Add something fun for the fitness goal you don’t like.

Balance out the pain of the workout with something you like. Maybe you can watch your favorite show while on the treadmill. Or listen to your favorite music while doing your ab workout. Give yourself an incentive to do the work.

Tips to stick to your new workout routine

5 reasons you should work with a personal trainer