What is a UCL injury of the elbow and the Tommy John surgery to treat it?

The anterior bundle of the ulnar collateral ligament is the elbow’s primary restraint against valgus force during overhead motions such as throwing. During the late cocking and early acceleration phases of the throwing motion, there are large tensile forces across the medial aspect of the elbow. With each throw, the ligament works to resist these forces and stabilize the joint.

While occasionally injuries to the ulnar collateral ligament occur acutely – meaning torn in a traumatic event with no underlying history of ligament damage – far more often they gradually fail over time. The pitcher often remembers the one throw during which the UCL finally gave way. But the ligament – and the pitcher’s performance – usually has been slowly worsening for months or even years.

Surgery for ulnar collateral ligament injuries almost always involves UCL reconstruction. A ligament from another part of the body – usually the palmaris longus tendon in the opposite wrist – is placed into the elbow to make a new ligament. The graft is passed through drill holes in both the humerus and the ulna. It is held in place by tying it to itself in a figure-of-eight fashion or anchoring it in other ways.

Studies show that roughly 83% of pitchers return to the same or higher level of pitching after surgery. It is believed that 25% of current MLB pitchers have undergone Tommy John surgery.

Unfortunately, these injuries, which used to be seen exclusively in older professional pitchers, are now being found in more high school pitchers than ever before. 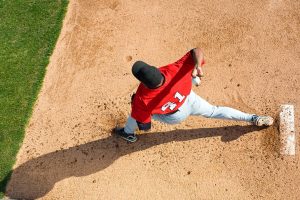 epidemic of injuries at the youth level. If you have kids who play baseball or other youth sports, you should read it and take steps to keep your kids healthy. Click here to get your copy!

Tommy John surgery for a UCL injury of the elbow