I’m in favor of changes that make football safer. Recently USA Football announced it was going to try some significant changes to try to make the sport safer. The changes might anger purists who like the battles and toughness of the sport. The changes might not go far enough for others. I thought I would explore the possible effects of these recommendations in my latest newspaper column.

USA Football plans to make radical changes to the sport at the youth level. Will these steps relieve parents’ anxiety about letting their kids play football? And will they actually make the sport safer?

The governing body for football in this country will test several changes as part of a pilot program before implementing them across the United States. The plan includes reducing the number of players on the field from 11 to 7, using a smaller 40-yard by 35-yard field, eliminating punts and kickoffs, mandating that coaches line up players of similar size against each other, making players rotate positions, and starting each play in a crouching position instead of a three-point stance. 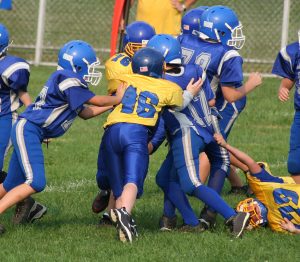 Parents’ fears of concussions and contact sports that cause them

USA Football calls the new format “modified tackle.” It hopes to provide an alternative for concerned parents. A recent survey of US adults performed by the University of Pittsburgh Medical Center found that roughly one in three parents fear their child will get a concussion. One in four parents don’t let their kids play some contact sports out of fear of concussions.

The decrease in participation in youth football

These fears are taking a toll on the sport. Despite the celebration by USA Football of news that youth football participation increased from 2.128 million children in 2014 to 2.169 million in 2015, the picture looks much bleaker when viewed over the course of the decade. Compared to the 3 million kids aged 6 to 14 who played football in 2010, the 2.169 million kids who play now represents an enormous 27.7% loss.

Participation in flag football increased 8.7% last year, suggesting parents might be looking for a safer option.

The NFL appears concerned about these numbers, reportedly investing tens of millions of dollars into USA Football to help promote the sport at the youth level. Sure, a drop in the number of kids who play the game could cut into its pool of talented players one day. More importantly for the league, fewer kids who play football could mean fewer adults who watch the sport on television or buy tickets and merchandise in the future.

Just as important as parent perception is the question of whether these changes will help protect young athletes. Two recent studies suggest that playing tackle football before age 12 could have long-term harm.

In one study, researchers compared former NFL players who played tackle football before age 12 to those who started at or after age 12. The former players who played younger than age 12 performed significantly worse on tests of memory, problem-solving and verbal intelligence. Will these changes make significant improvements?

I applaud USA Football for exploring and implementing steps to try to keep kids healthy. I expect the changes will only lead to marginal improvements for both questions.

First, I think the modified tackle program will alleviate concerns for a small number of parents but not most of the 25% who won’t let their kids play out of fear of concussions. We might see the decrease in youth football participation slow or even level off, but I doubt we will see a big increase from it.

I also believe it could make the game marginally safer. We could see fewer concussions, but I doubt we will find much improvement in the repetitive subconcussive blows, such as the collisions between offensive and defensive linemen at the beginning of every play. Those repetitive subconcussive blows are what many brain experts believe are the real culprit that lead to chronic traumatic encephalopathy (CTE).

More time and data will tell.

Do you have a child who plays football? Or are you a football fan? In my new book, That’s Gotta Hurt: The Injuries That Changed Sports Forever, I discuss concussions, chronic traumatic encephalopathy and the future of football. It might be controversial, so I would love to know your thoughts! Order your copy now from Amazon, Barnes and Noble, Books-A-Million, IndieBound or Powell’s Books.

Note: A modified version of this article appears as my sports medicine column in the February 16, 2017 issue of The Post and Courier.

Concussions Misunderstood and Feared by Most Americans, according to Harris study. Press release, UPMC. Oct. 1, 2015.