What should baseball do about wet bases and the injuries they can cause?

Several years ago, I pushed for breakaway bases for Major League Baseball, or at least a study into their feasibility. I think it’s worthwhile to try to cut into the thumb and finger injuries that have injured many baseball players in recent years. Now we have another base controversy, as a second star player has been injured sliding into a wet base. In my latest newspaper column, I explore the options for MLB to address wet bases and the injuries that can result. 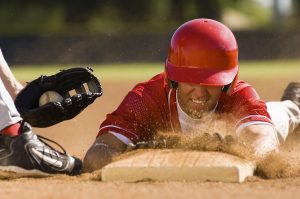 Kris Bryant suffers a sprained ankle on a wet base

Bryant, a three-time All-Star, landed awkwardly on the first-base bag trying to beat out a double play against the St. Louis Cardinals. An MRI performed Monday revealed a grade 2 sprain, according to ESPN’s Jesse Rogers.

The Cubs entered Tuesday four games behind Milwaukee for the final wild-card spot with six games to play. A grade 2 ankle sprain likely will cause the 2016 National League MVP to miss the remainder of the regular season.

In an interview with the Chicago Sun-Times, Boras ripped MLB for failing to ensure the players’ safety. The prominent agent also called for changes to address wet bases when another one of his clients injured his knee in a similar scenario. “What have they done since Harper? The answer is, nothing.”

Bryce Harper suffered a knee injury on a wet base

In August 2017, then-Washington Nationals star Bryce Harper slipped on a wet first base. His knee buckled before he flew in the air and landed on his side. As he writhed in pain behind first base, Harper lamented about playing a game in the rain at 10 o’clock at night. Fortunately, an MRI found no structural damage. The 2015 National League MVP only suffered a bone bruise.

Boras complained that MLB officials have made no changes since Harper’s injury. “The integrity of our game is going to [be] damaged when the safety of players is not at the forefront, and Major League Baseball has dropped the ball on the wet-bag subject.”

The increased emphasis on playing through rainy conditions

The risk of players sliding on wet bases and getting hurt might actually be higher now than when Harper injured his knee. League officials have placed increased emphasis on playing through bad weather this season to try to cut the number of postponed games that would need to be made up later.

Are the current bases the safest?

A spokesman for MLB responded Monday, “To date, no one has come up with a bag that has proven to be better safety-wise than the bag we use now.”

MLB Rule 1.06 requires that bases are “marked by white canvas or rubber-covered” and “securely attached to the ground.” A change to the bases would come from the league’s Safety and Health Advisory Committee, which has representatives from both Major League Baseball and the Players Association.

Are these injuries on wet bases common?

These seem to be rare injuries, as Bryant’s and Harper’s are the only two injuries I can remember resulting from wet bases. But they are also star players, so they attracted media attention when they went down. Many more players in the majors and minor leagues could have suffered ankle and knee injuries in the same way.

They certainly seem less common, though, than the thumb injuries that have resulted from head-first slides into rigidly fixed bases, leading to many calls for breakaway bases.

This issue is a balance between player safety and pleasing fans by not postponing or delaying games in rainy conditions. But it’s an issue worth studying to see if we can appease fans by letting the games continue while simultaneously protecting players by finding a base or base covering that doesn’t become slick.

I’m sure it’s possible to create a base that absorbs moisture. I would imagine that it’s hard to test the slickness of those bases without putting them on the field and letting players run on them during games. The newer bases could work and decrease injuries. Or we could see a spike in unintended injuries from the different base surface or filling.

An idea from the NBA

The simplest answer in the short term comes from the NBA. As Boras points out, when a basketball player falls on the court, attendants mop up any perspiration immediately so the floor doesn’t become slick. MLB could assign ball boys and ball girls to wipe off wet bases with towels between plays.

I’m all for pleasing fans, but MLB needs to find a way to better protect players, either by drying off bases or redesigning the bases altogether.

Note: A modified version of this article appears as my sports medicine column in the September 26, 2019 issue of The Post and Courier.