Is youth basketball to blame for the rise in NBA injuries?

For years, as attention has focused on youth baseball as the classic example with the problems of single-sport specialization for kids, I wondered when that same scrutiny would come to youth basketball. Kids in AAU and other basketball leagues play in a huge number of games and tournaments and play throughout the year with no break. When ESPN published a two-part series by Baxter Holmes about injuries in the NBA and how youth basketball might be responsible, I thought I’d share my thoughts in my latest newspaper column.

A look at the youth basketball system in the United States

Last week ESPN published a two-part series by Baxter Holmes examining injuries in the NBA. Holmes offers a surprising culprit: the youth basketball system in this country. Despite the fact that basketball is now the most popular youth team sport, it has largely escaped the scrutiny baseball has endured when it comes to overuse injuries. As an orthopedic surgeon, I can tell you this look at the potential damage on elite basketball players is long overdue.

NBA injuries on the rise

In his articles, Holmes cites data from athletic trainer Jeff Stotts and his NBA injury database. In the 2017-18 season, NBA players missed more than 5000 games due to injury or illness, the first time it has reached that mark since the end of the injured reserve in 2005.

Perhaps worse, the past four NBA seasons have had the highest numbers of games missed by players in their first two seasons in the league ever. NBA Commissioner Adam Silver told ESPN injuries are “the highest priority for the league.” Health and well-being aren’t just issues for the NBA, Silver believes, but for the millions of kids who play in the U.S. and the rest of the world. 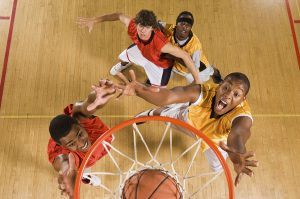 The demands of the NBA

The demands of the NBA are certainly one place to look for a cause for rising injury rates. Athletes play 30 or so games per season in college. Then between summer league, preseason, the regular season, and possible the playoffs, they might play 90 or 100.

The demands of youth basketball

The real problem seems to start much earlier, with kids playing that many games as young as 10 years old. Holmes notes an official with the Nike EYBL circuit estimates that a kid who plays consistently from age 7 to 19 might play as many as 1000 games in that span, equal to 12 NBA seasons.

The influence of the youth basketball system on young basketball players

Young basketball players and their parents and coaches see the huge salaries, the shoe deals and marketing opportunities for LeBron James, Steph Curry and Zion Williamson and do whatever they can to get into the league. They join club teams at early ages to improve and get noticed by scouts. They only play basketball, play it year-round, and play in every elite tournament and all-star game they can.

These kids are becoming better players than ever under this system. But all of that play from specializing in basketball and playing it all year with no break for over a decade sets them up to break down physically by the time they enter the NBA.

Holmes discusses the challenge of rising through the club circuit with Kobe Bryant, who has a daughter who plays. Bryant did not specialize in the sport until he was 15 or 16. But he worries about the potential long-term damage on his daughter from playing so much at a young age.

Likewise, the mother of this year’s number one pick, Zion Williamson, expressed similar concerns for her son when he was 16. She limited him to four tournaments per summer.

The NBA and USA Basketball established guidelines for youth basketball to try to keep kids healthy. Much like those in youth baseball, these guidelines offer recommendations about game and practice length, number of games and hours per week, and amount of rest a kid should have based on his or her age. They also recommend avoiding playing only basketball until 14 years old.

We have to do something about this issue. A 2017 study in the American Journal of Sports Medicine (AJSM) found a clear relationship between kids specializing in one sport at an early age and a higher rate of injuries.

Likewise, another AJSM study found that NBA first-round draft picks who played multiple sports in high school experienced fewer injuries once they played in the NBA, played more games in the league, and had longer careers than those who specialized.

Playing sports other than basketball will help get them to the NBA and keep them healthy enough to stay there.

It’s up to parents to fix this system

The problem is that it won’t happen unless parents choose to take action. With no governing body overseeing and enforcing how much kids can play, coaches will convince them to play for their teams, play in every all-star game and elite tournament, all year, ever year.

Basketball has the same issue as youth baseball. Sure, Little League has pitch counts. But the bigger risk might be the number of innings a kid pitches throughout the year. But a coach of a spring team can’t dictate how much a kid throws on his summer team, or his fall or winter team. A young pitcher might abide by the pitch counts in each season but badly overuse his arm by pitching every season.

Changing the youth basketball system to protect the health of kids

If we want to keep young basketball players healthy, now and in the NBA, kids need shorter practices, fewer games and tournaments played each season, and three or four consecutive months off each year to play other sports. Parents have to step up and take these steps because most youth coaches won’t. Otherwise they risk their kids becoming a statistic in Stotts’ database, assuming they even make the NBA.

Note: A modified version of this article appears as my sports medicine column in the July 19, 2019 issue of The Post and Courier.

‘These kids are ticking time bombs’: The threat of youth basketball. By Baxter Holmes. ESPN.com. July 11, 2019.

Baseball And Basketball Participation Numbers On The Rise. LeagueApps.