I was watching NFL Red Zone live Sunday afternoon and saw Chicago Bears tight end Zack Miller’s knee injury live. I didn’t notice his knee buckling until they showed the slow-motion replay. It was hard to watch. If you missed it, think of how Marcus Lattimore’s knee bent backwards a few years ago. While the mechanism was different, they ended up with similar injuries. But as I discuss in my latest newspaper column, Miller’s had one important difference – a torn popliteal artery.

In the third quarter of Sunday’s game against the New Orleans Saints, Bears quarterback Mitchell Trubisky threw the ball into the end zone, where Miller tried to make an over-the-shoulder catch. His left leg bent backwards as he fell to the ground.

The Bears medical staff rushed to the field and carted Miller away. They quickly took him to a local hospital, where he underwent an emergency surgery. 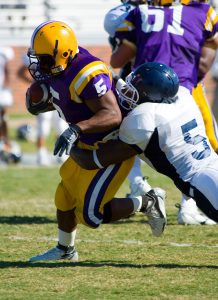 Vascular surgeons at University Medical Center New Orleans diagnosed Miller with a torn popliteal artery. They used tissue from the other leg – likely the saphenous vein – to repair the damaged artery and save his leg.

According to ESPN’s Chris Mortensen, Miller dislocated his knee on that attempted touchdown catch, tearing the main artery that delivers blood to the foot. He underwent an MRI Monday to evaluate blood flow through the repair and reveal the injured knee ligaments.

While such an injury could have led to doctors amputating Miller’s leg, Bears head coach John Fox reported that the tight end has a good pulse in his lower leg and good feeling. “Not that he’s out of the woods by any stretch,” Fox said, “but it’s as good as could be expected at this point.”

Also read:
The long road to recovery for Marcus Lattimore

Explanation of a knee dislocation, or a multi-ligament knee injury

A knee dislocation, or more specifically a multi-ligament knee injury, involves the tibia (shin bone) sliding out from under the femur (thigh bone). The athlete tears at least three of the four main stabilizing ligaments of the knee – the ACL and PCL inside the knee, and the MCL and LCL on the sides of the knee. One of the main nerves that controls function of the foot and ankle can also be damaged.

How the popliteal artery is damaged in a knee dislocation

Popliteal artery injuries like Miller’s are the most dangerous outcome of a multi-ligament knee injury. Studies show these vascular injuries occurring in anywhere from 5% to 32% of knee dislocations. Because the artery is essentially fixed by muscles in the lower thigh and upper leg, it can only stretch a little bit. When the tibia dislocates, it can tear the artery.

Also listen:
Episode 63 of The Dr. David Geier Show: Why are knee dislocations such devastating injuries?

These injuries have a high rate of leg amputation if the vascular injury isn’t detected and treated quickly, as Fox correctly noted. Patients with a multi-ligament knee injury and popliteal artery injury who require a bypass graft like what Miller had also have worse long-term outcomes than patients with just the ligament damage.

I expect surgeons to wait several weeks for the artery repair to heal before they reconstruct the ligaments of his knee. Fox told reporters that Miller will stay in the hospital for the foreseeable future. “Obviously, with any kind of vascular issue, you don’t want altitude, you don’t want people flying around. He’ll have to remain still there for some time. He won’t be coming back to Chicago any time real soon.”

Fox said Miller was in good spirits Monday, still arguing that he made the touchdown catch despite replay officials overturning it for failing to maintain possession of the ball.

Long-term future and return to football

Whether he made the catch obviously isn’t the key consideration now. He will need surgery to reconstruct the injured knee ligaments and then at least a year to rehab his knee and regain strength and motion. Doctors will also follow the healing of the artery repair and likely keep him on blood thinners. It’s uncertain if a professional athlete can return to play at that level after those surgeries. Let’s keep Zach Miller in our thoughts and prayers.

Note: A modified version of this article appears as my sports medicine column in the October 31, 2017 issue of The Post and Courier.

Could or should Jay Cutler have played?

Would you risk an earlier death to play football?

This is a comprehensive Q&A collection on MCL and PCL injuries, patellar dislocations, patellar and quad tendon ruptures, knee dislocations and more.